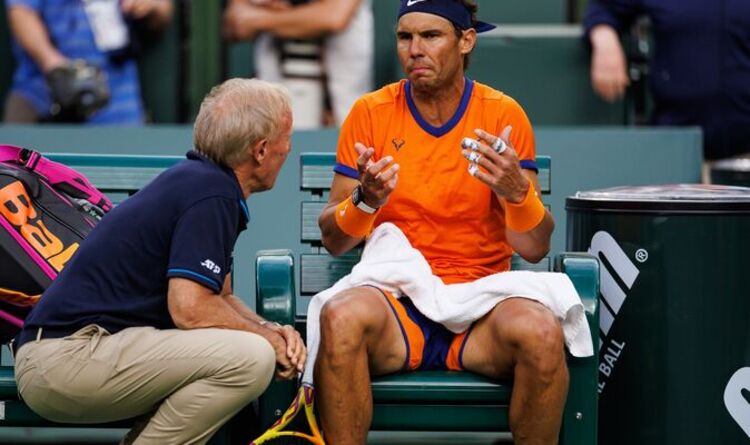 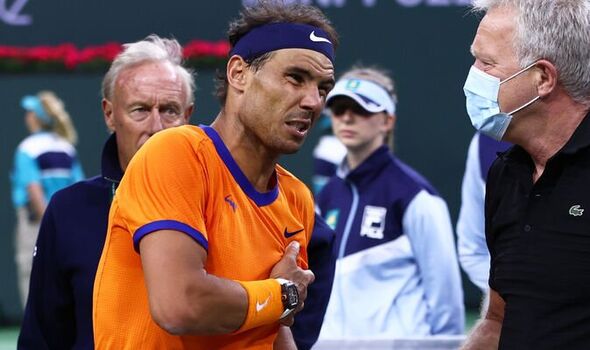 Rafael Nadal has been told he should have skipped the BNP Paribas Open at Indian Wells after picking up an injury in the tournament that is now set to rule him out for six weeks. Nadal, 35, announced last August that his 2021 season would be finishing early due to a chronic foot problem, and then his scheduled comeback in December was scuppered when he tested positive for Covid-19.

However, despite his inactivity, the Spaniard made a stunning return to action in January, first winning the ATP Summer Set event before going on to capture his 21st Grand Slam title by beating Daniil Medvedev in the final of the Australian Open. The triumph elevated him above rivals Novak Djokovic and Roger Federer, with whom he previously shared the record with 20.

His renaissance didn’t end there, overcoming Cameron Norrie to win the Mexican Open, going through the tournament without dropping a set. And the icon seemed poised to extend his fairytale start to the year when he also reached the final at Indian Wells.

However, after enduring breathing problems during his defeat by American Taylor Fritz, Nadal announced he had a stress fracture in his ribs. He’s now likely to be out of action until the end of April, hindering his preparations for the French Open in May.

JUST IN: Novak Djokovic ‘won’t have sponsorship issue’ as his brother speaks out after Peugeot axe

And now Mats Wilander, himself a winner of seven Grand Slam titles, has told Eurosport that the Spaniard paid the penalty for pushing himself too hard physically. “I thought, after he won Acapulco, beating Danilo Medvedev again, that he would take free time and skip Indian Wells and Miami, that he would take a month off for the clay court season,” said the Swede.

“I think he put too much strain on his body, but Rafa Nadal loves tennis so much and to compete, he felt good, he left and ran to the maximum. People say that Rafa Nadal will not last long due to injuries. But I think differently, Rafa Nadal will last until he gets injured. And then he will go home, rest, recover, and come back again and bring himself to his limits.”

DON’T MISS:
Naomi Osaka hits back at Stefanos Tsitsipas’ suggestion about women’s tennis
Novak Djokovic ‘stronger than ever’ as Serb praised ahead of Monte-Carlo Masters return
Victoria Azarenka breaks silence after storming off court during Miami loss to 16-year-old

Nadal had previously been considered a clear favourite to prevail at Roland Garros, a venue where he has dominated since first winning there in 2005. Indeed, 13 of his 21 Grand Slam successes have come in Paris.

But Wilander, 60, believes momentum has now switched back towards Djokovic, who he believes could actually benefit from his recent lack of game time. The Serbian, 34, is the defending champion having beaten Nadal in the semi-finals before coming from two sets down to overcome Stefanos Tsitsipas in the final. 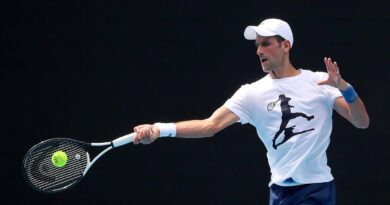 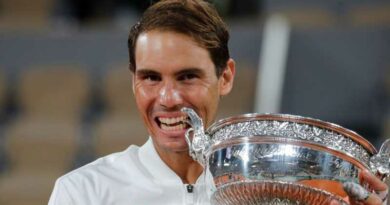 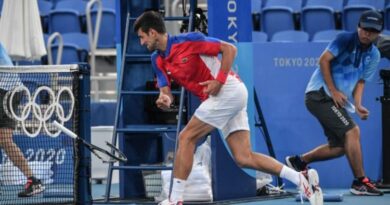