The 25-year-old outclassed unseeded countrywoman Ajla Tomljanovic 6-1 6-3 to set up what promises to be a tough assignment on Thursday when she faces 2018 champion Angelique Kerber.

“It’s the ultimate test,” Barty said. “Angie’s had success here before. I love that match-up. She knows her way around this court and I know I need to play well to give myself a chance in that match.

“This is a dream come true.”

Tomljanovic had never made it past the round of 16 at a grand slam before this year’s tilt at the All England Club and found the step up in the quarter-finals against world No. 1 Barty too big an ask.

“The match-up felt really bad from my side,” Tomljanovic said. “Felt like she was neutralising my serve with the slice, which kind of set the tone for me and made me really uncomfortable because it was hard to break her.

“She was serving great, and the slice was just really hard to deal with today.”

Barty is aiming for a second career major.Source:Getty Images

Barty seized control of the match from the off, breaking Tomljanovic twice early on and then broke the 28-year-old for a third time to win the first set 6-1.

Tomljanovic’s boyfriend Matteo Berrettini tried to rally her spirits with applause from the guest box — though the men’s quarter-finalist looked far from confident, licking his lips nervously — as she prepared to receive serve from Barty at the beginning of the second set.

For a brief moment it appeared that might have done some good as Tomljanovic broke Barty in the first game.

However, she lost her serve immediately and her next one as well to give Barty the break she required.

Tomljanovic — whose last 16 match had been much later than Barty’s on Tuesday — did break back to trail 3-4.

However, as soon as she threatened a fightback Barty went up a gear and reeled off the next three games to progress.

As we’ve come to expect from Barty, she was quick to praise her opponent.

“Ajla is an incredible competitor. I’ve practised with her a lot, played with her as Fed Cup teammates. She was always going to bring out the very best in me,” Barty said.

“I had to play my absolute best to be able to compete with her. She’s had an incredible fortnight and I think all Aussies back home are bloody proud of her. It was really nice to share the court with her today.”

The pair shared a nice moment at the net.Source:AFP 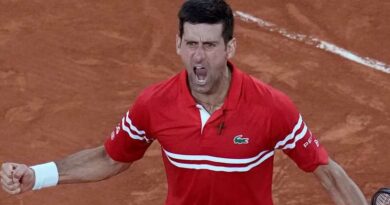 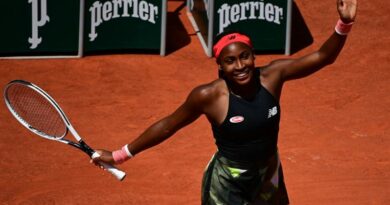