Numerous Greek fans were evicted from the Australian Open on Wednesday night, days after star player Stefanos Tsitsipas called for his exuberant supporters to remember they were at the tennis, not the football, and to tone down their behaviour.

Fans complained of racism over their eviction from Melbourne Park after the match between Greece’s 22nd seed Maria Sakkari and Japan’s Nao Hibino.

Victoria Police confirmed a group of between 15 and 20 men were ejected at 6.05pm for disruptive behaviour.

‘‘The group had received numerous warnings during the match on Court 8 from the match referee, security and the police,’’ a police spokesperson said.

Sakkari said she had not thought the fans’ behaviour inappropriate, and hoped the fans would be welcome at future matches. 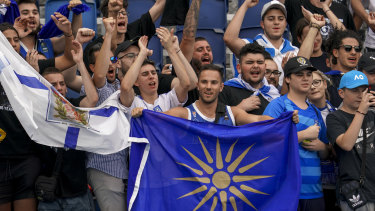 Tennis fans get behind Greece’s Maria Sakkari on Wednesday.Credit:Eddie Jim

On Wednesday, the local Greek fans returned in full voice for Tsitsipas’ next match, only to be disappointed when his opponent, Philipp Kohlschreiber, withdrew due to injury.
They then migrated to Court 8 for Sakkari’s match.

‘‘I think they were great, they were very respectful of the opponent. They stopped when they had to stop,’’ Sakkari said.

She said chants about Macedonia were a product of patriotism and as expatriates or descendants of Greek migrants, the fans felt ‘‘more Greek than we are’’.

‘‘It is going to feel different playing here without them, that is for sure … it makes me play better, it gets me more pumped. I really hope it (fans being thrown out) is not going to happen.’’

The royal blue flag of Greek Macedonia with the Vergina Sun in the middle flapped alongside others of Alexander the Great and the Greek flag in the stands of Court 8.

Alex Anyfantis, a sports journalist from Greek community newspaper Neos Kosmos, said some Tsitsipas supporters had booed his opponent, Italian Salvatore Caruso, on Monday and some had strayed into political territory. ‘‘It’s in support of Greece in the dispute with North Macedonia,’’ he said.

The country previously known as the Former Yugoslav Republic of Macedonia was officially renamed North Macedonia in 2018.

On Monday Tsitsipas didn’t like the degree of exuberance his supporters offered. ‘‘I really like they come and support me because that gives me a lot of positives in my game. I don’t really know why they want to go the extra mile some of the times,’’ Tsitsipas said.

‘‘If I would be an opponent … I mean, I do understand he doesn’t understand what’s happening out there and what the chants are, but I think also, from their side, they should be a little bit more respectful to the opponents. That’s all. Nothing else.’’

Which Nick Kyrgios will feature in New York?

Australian Open: Novak Djokovic must ‘go up a level’ to beat Dominic Thiem