‘‘Maybe I won’t win a game,’’ Kim Clijsters laughs, as she ponders the reality of one of tennis’ more unlikely comebacks in 2020. ‘‘But I’ll definitely try hard.’’

Her unassuming and self-effacing remark is typical Clijsters. Never one to trumpet her talents, the four-time grand slam champion has been overwhelmed by the messages of support since announcing in September her plans to come out of retirement at the age of 36, and as a mother of three to Jada, 11, Jack, 6 and Blake, 3.

Not that she has been a hermit in the seven years away from the tour. By playing legends tennis and being a pundit at the majors, Clijsters has remained immersed in the sport, but she always relished retreating to her idyllic home in the small Belgian town of Bree, where she grew up playing tennis in the street with her younger sister Elke. Her children go to her old school, and with her grandparents next door and surrounded by their farmyard animals, the homespun setting could not be more removed from the glitz and grind of the professional tennis circuit. 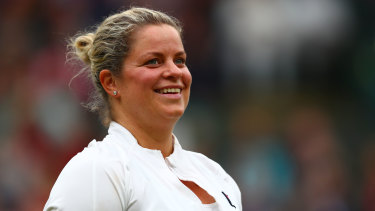 ‘‘I’ve become a bigger part of the community with the kids at school and, after it was known what I was doing, I had older people grabbing me saying, ‘This is so exciting’ and, ‘You have no idea how much it means to me’,’’ Clijsters says.

‘‘I was so overwhelmed by people’s reactions. I was at the coast with the kids and a lady ran by us. A few minutes later she comes back and says, ‘I didn’t want to bother you, but I had to say what you’re doing is such an inspiration’. It’s very touching. It makes me emotional to have those connections with people you don’t know.’’

The well-wishes from fellow professionals past and present have been appreciated, but she has not spent time digesting them. Clijsters is not one to seek approval or validation. She has always made decisions based on what works for her family, guided by gut instinct.

‘‘The one thing I was concerned about [when it came to her announcement] was, is it worth being in that spotlight as a family and mother?’’ she says. ‘‘There were people who gave me a lot of advice on how Roger [Federer] and other athletes with a family handled it. When I’m here at home it’s not like I’m doing a lot of TV or interviews, I like a normal life.

‘‘When the news did come out, TV stations went to the school of my kids. That’s when I was like, ‘Woah hopefully this will fly by pretty quickly and then our lives can just stay the same’. I just want to play tennis and try to do it at a high level again.’’

Clijsters has, of course, made a successful return before. After retiring in 2007 at 23 to start a family with husband and former professional basketball player Brian Lynch, she came back two years later and won her second US Open title as an unranked player in her third tournament back.

By taking the Australian Open in 2011, she equalled Margaret Court’s record of winning three majors as a mother, and became the first mum to be ranked world No.1.

‘‘It’s going to be different than before,’’ Clijsters says. ‘‘I’m not going to play a lot of tournaments. The kids aren’t going to travel with me as much. I’m going to have to pick my tournaments wisely to see what works with the kids and with school, exams. I know this is just going to be something for two, three, four years if I can stay healthy and learn more about how my body will react. I’ll need to find out how long I’ll need between tournaments, how many can I play in a row. I have a lot of experience from the past, but this situation is very new.’’

It is not a knee-jerk decision. The pull of the professional circuit has been reeling Clijsters back with every trip to the majors over the past few years. It was in Melbourne in early January where the desire became too great to resist.

‘‘I was playing legends and enjoying it. I’d have players ask if I’d hit with them and enjoy it, but I wasn’t getting out of the tennis what I wanted and what I felt I still had in me. Being in Australia doing commentary and being so close to the action brought back the passion. I spoke to my husband about it. At the time I was 35 and thought, ‘You see Roger, Venus and Serena, maybe I should try it?’ The year before that I got triggered a few times, but then I came home and was so busy with the kids.

‘‘After Australia, I said to my trainer, ‘Do you think this is possible after three kids, my body, my age and everything?’ So I told Jada and Brian and it slowly grew.’’

Jada, a keen basketball player like her father, was too young to remember what life was like on tour with her mother, and certainly has no memory of the 2010 US Open final at Flushing Meadows, when Clijsters cradled her in one arm and the US Open trophy in the other. But in the Belgian’s understated way, these remain memories to treasure rather than ones to showcase.

‘‘I have a lot of trophies at my academy, but all the memories are in my head,’’ Clijsters says. ‘‘With my trainer I’ll talk about moments we shared back in the day, but you couldn’t tell I played tennis if you walked into my house.’’

Jada got a taste for life on the road when she joined Clijsters for the opening ceremony of the renovated No.1 Court at Wimbledon in May. Clijsters went into the exhibition against Venus Williams still deliberating on a return, but the decision became clear to Jada.

‘‘She was the one who told me, ‘Mum, you have to come back’,’’ Clijsters says. ‘‘Jada was in awe of Venus. Before we went on court, we were warming up and Jada was standing next to me. She said, ‘Mum, you look 10 years older than her’. I said, ‘Really? Thanks Jada!’ That was motivation. I told Venus and she was laughing, too.’’

A minor knee injury has ruled Clijsters out of a return at the Australian Open this month, and while February looks likely to be the beginning of her second coming, she has accepted wild cards into three WTA tournaments in March – including Indian Wells – with the possibility of emotional grand-slam appearances at the French Open and Wimbledon this summer.

So can fans expect her high-energy, athletic style on court again? And will they be treated to her infamous splits?

‘‘I did my first slide and split during a training camp in Tenerife a few weeks ago. I didn’t expect it and hadn’t planned it. Everyone took a big intake of breath and my coach and trainer just laughed. I don’t think it will happen much.’’

While Clijsters adjusts to the new reality of her body, she also has to contemplate facing the growing number of whippersnappers on tour.

‘‘I was watching Naomi Osaka hit from the back of the court earlier this year and thought, ‘Oh my God, she hits the ball so hard’. But that’s the challenge. I look forward to having that chance to stand in front of those players.

‘‘My kids and their schedules will not be affected by my decision to come back. I like that balance I have now. I have that passion for tennis. I love the game, love what it triggers inside me. It’s different now than when I came back with one child. Now I think it’s something that drives me, it’s a challenge for me. I want to see how far I can go.’’