Nick Kyrgios has declared Serena Williams the tennis “GOAT” as he tries to block out the hysteria of the American’s farewell show so he can focus on his US Open opener.

Every one of the 23,771 seats will be filled at Arthur Ashe Stadium, the largest arena in tennis, to pay homage to the legendary 23-time grand slam champion.

Kyrgios knows it will be an emotion-charged night but believes he can’t afford to get swept up in the occasion and says he probably won’t watch Williams’ clash with Danka Kovinic, of Montenegro.

“It’s obviously a very special moment for her. She’s probably the greatest of all time. Whether or not we see anyone deliver the career that she has, I don’t think that’s possible,” he said.

“I’ll just kind of chill out, follow the score to see what my warm-up is and all that, but that’s for her. I don’t know the amount of emotion she’s dealing with. I couldn’t imagine it. 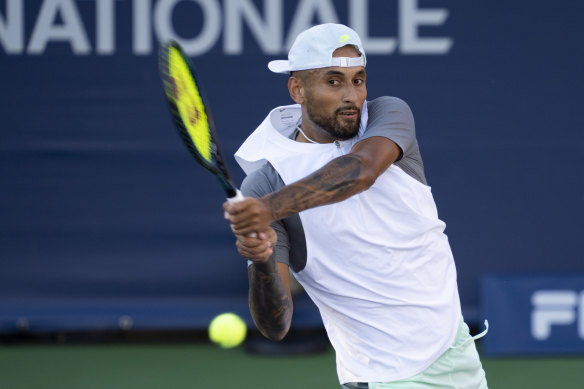 “It would be so exhausting. Everyone’s talking about it, everybody wanting to know how she feels.”

Williams, 40, announced this month her 21st US Open would likely be the last of her career as she “evolves away from tennis”.

Ranked No.605 after barely playing over the past 14 months, the long-time former world No.1 will finish up one major title shy of Margaret Court’s all-time record of 24 grand slam singles triumphs, unless she pulls off a shock in New York.

“I just want her to enjoy the moment,” Kyrgios said of Williams’ potential last competitive match. “I’m sure she’ll have a lot of nostalgic feelings out there. Hopefully, she wins. I wouldn’t want to see her lose. It would be a pretty cool story if she went out with a great result.”

She has also lost four finals, including in 2018 and 2019 to Naomi Osaka and Bianca Andreescu respectively, both in straight sets, while trying to match Court’s record that has stood since 1973.

Watch all the action from the US Open ad-free, live & on demand on Stan Sport, with centre court matches streaming in 4K UHD from Tuesday 1am AEST.