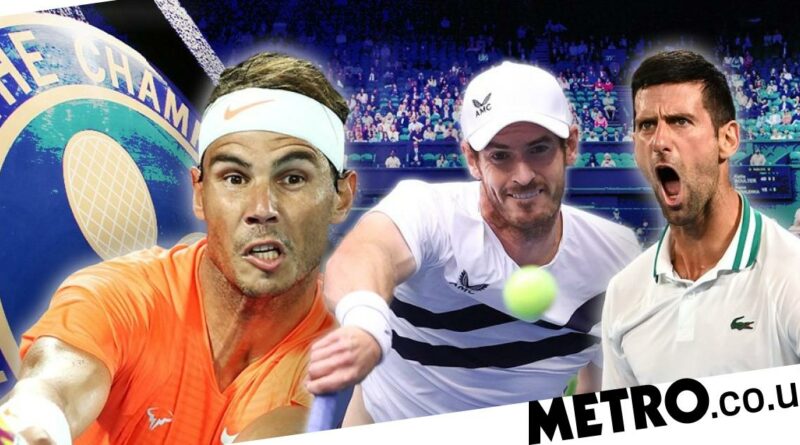 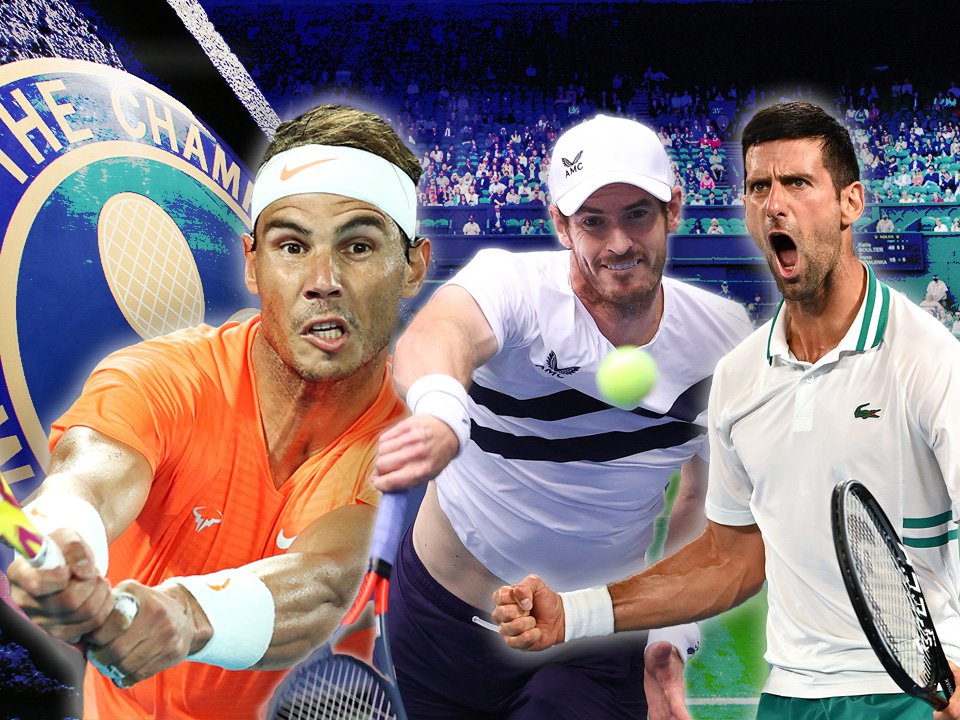 For all the chat of the new generation replacing the old guard, there’s a good chance the Wimbledon 2022 final could be contested between two well-known faces.

That’s mainly because world No 1 Daniil Medvedev is ruled out due to the tournament’s ban on Russian and Belerusian players and world No 2 Alexander Zverev is injured – meaning Novak Djokovic and Rafael Nadal will not meet until the Championship match – if they make it that far.

There is no Roger Federer for the first time since 1992 but Andy Murray will be there after sitting out Queen’s Club after picking up an injury in Stuttgart. Perhaps British No 1 Cameron Norrie could make a surprise run to the final, he is seeded eighth after all.

And what about the other Brits – Dan Evans, Jack Draper, Liam Broady, Paul Jubb, Jay Clarke, Ryan Peniston and Alastair Gray? Don’t be fooled by the off-court rows and lack of ranking points: SW19 will not disappoint this year. Here’s six players who could lift the trophy come July 10.

Novak Djokovic is undoubtedly the favourite heading into Wimbledon, despite what you may think of his off-court viewpoints on vaccinations and dip in form so far this season. With no Daniil Medvedev or Alexander Zverev, the Serbian is top seed.

Djokovic, currently ranked at world No 3, is a six-time champion here for very good reason; he is simply an incredible tennis player. Don’t be fooled by his decision to sit out the grass-court campaign thus far: he has won Wimbledon five times in the past without participating in preparation tournaments. There is a very good chance he will make it seven in 2022.

The 35-year-old will be desperate to lift the trophy this year for several reasons. He will hate that the spotlight is back on old foe Rafael Nadal after the Spaniard not only knocked him out of the quarter-finals at the French Open – with Djokovic not dropping a set in the tournament beforehand – but that Nadal has won back-to-back Grand Slams after his triumph Down Under.

It wasn’t long ago that Djokovic looked on course for a Golden Slam after winning the 2021 Australian Open, Roland Garros and Wimbledon titles – but eventually slipped up to Medvedev in the Flushing Meadows final before Zverev won Gold at the Tokyo Olympic Games. You better believe Djokovic will want to redeem himself for that and put the focus back on himself.

Not only that, but with no ranking points at this year’s Championships, mixed with his decision to sit out the grass-court tournaments, Djokovic could fall as far as World No 8 after SW19. He will be yearning to put his name back on that trophy to silence his critics. ‘Winning Wimbledon was always the biggest dream as a kid,’ he said after beating Matteo Berrettini in last year’s final.

Coming in as the second seed fresh from lifting the French Open for the 14th time is one of the best players to ever step foot on a tennis court, the legendary Rafael Nadal. He was understood to be struggling with injury but has confirmed his participation at this year’s Championships after already claiming two Grand Slam titles this year.

Winning the Channel Slam is one of the hardest feats in the sport and Nadal has already shown he can do it – winning both Roland Garros and Wimbledon in 2008 and 2010 – but doing it for a third time at the age of 36 would be nothing short of outrageous. If he gets the job done, he will be only the second player in history to do it three times after the great Bjorn Borg from 1978-1980.

‘We don’t give him enough credit just because he’s so good on clay,’ former world No 1 Andy Roddick said, while Toni Nadal, his uncle and former tennis coach, added: ‘Rafa is still a candidate to win Wimbledon.’ You just can’t write off a player this good, despite the surface.

It bodes well for the Spainiard that he will avoid Novak Djokovic until the final if they both make it there, as well as the fact that there is no Daniil Medvedev or Alexander Zverev this year.

The world No 4 has won 22 Grand Slams and can make even more history by becoming the first player ever to achieve two Surface Slams – winning three consecutive major titles on three different surfaces in the same season – if he emerges victorious at Wimbledon.

Nadal has only ever won the Championships twice, but a third trophy here would surely be one of the greatest and most impressive in his already-illustrious career.

Great British hero Andy Murray needs no introduction. The two-time Wimbledon champion and former world No 1 has slipped down to No 47 but there is no denying that on his day he can beat anyone. The problem, as has been the case for the past few years, is his injury record. He pulled out of Queen’s this year due to an abdominal problem.

And what a shame it was too. He picked up the injury during the final of the Stuttgart Open – attempting to win his first ATP Tour title since 2019, when he claimed the European Open – eventually losing out to Matteo Berrettini 4-6 7-5 3-6. It was his second ATP Tour final of 2022 after the Sydney International in January and marked his second-ever loss in ten grass finals.

He produced a fantastic win over Stefanos Tsitsipas in the last eight in Stuttgart – one of the players tipped to dominate tennis over the next decade when the likes of Novak Djokovic, Rafael Nadal and Roger Federer (the latter is out injured this year, by the way) finally decide to call time on their careers. The victory was Murray’s first over a top-five player in over five years.

Murray reached the third round of Wimbledon last year as a wildcard, losing out to 10th-seed Denis Shapovalov after a grueling five-set win over Oscar Otte in round two. He had been struggling with a groin problem beforehand and was no way near full fitness. Perhaps his call to sit out Queen’s this time around will give his body time to recover before the big show in 2022.

The stars may align for Matteo Berrettini this year as he hunts down his first Grand Slam title. He reached the 2021 showpiece, only losing out to Novak Djokovic at the peak of his powers. In doing so, he wrote himself into the history books, becoming the first-ever Italian to reach a Wimbledon singles final – and the first Italian man to appear in a major final since 1976.

Big-serving Berrettini has established himself as a force on the lawn, with a serve that regularly tops 135mph. It’s one of the best skills you can have on this fast-paced surface. He won Queen’s Club last year, the biggest title of his career and his first at ATP 500 level, and defended his title earlier this week. He beat the top-three ranked Brits en route in 2021 – Andy Murray, Dan Evans and Cameron Norrie – defeating the former once again in the 2022 Stuttgart Open final this year. That’s now three titles on grass.

‘It is unbelievable,’ the world No 10 said after lifting the trophy. ‘I don’t even think I played my best tennis, but that is why I am even more proud of myself. Mentally I was really tough. I did an unbelievable job to be there. I fought hard and this means a lot.’ Speaking after last year’s Wimbledon final, he said: ‘I’m happy with my performance… hopefully it won’t be the last.’ Surely it won’t.

The second-youngest player ranked in the top ten, Felix Auger-Aliassime is considered one of the stars of the future and has really impressed across his last four Grand Slam appearances. The Canadian goes into this year’s Wimbledon as the sixth seed and could easily produce something special as he looks to get his first major final under his belt.

At last year’s Championships, Auger-Aliassime worked his way into the last eight as the 16th-seed, producing a thrilling five-set victory over current world No 2 Alexander Zverev and only narrowly losing to Matteo Berrettini, who went on to reach the final. It was his best showing at a major tournament so far and he did not stop there.

Next up was the US Open, where he went one better in reaching the semi-finals, which remains his best run at a Grand Slam. At this year’s Australian Open he clinched a quarter-final spot, beating former major champion Marin Cilic in the fourth round. Most recently at Roland Garros he lost to Rafael Nadal in round four but pushed the King of Clay to five sets, becoming only the third player to do so at the tournament which the Spaniard has famously dominated for so long.

Known for his strong serve, he is always going to be strong on grass courts and has reached the Stuttgart Open final twice, although lost out both times in 2019 and 2021 respectively. Time will tell if he can keep up his impressive form at the majors and his high seeding may well help him do so.

Croatian Marin Cilic is an interesting one to keep an eye on. He was a world No 3 back in 2018 – and following a slump in which he dropped from the top 30 – he now seems to be back on an upwards trajectory. The world No 17 goes into this year’s Championships as the 14th-seed.

The 33-year-old just produced a great performance at Roland Garros, beating Gilles Simon and then wiping out current world No 1 Daniil Medvedev in the last 16, eventually making his way to the semi-finals. In doing so he became only the fifth active player after Novak Djokovic, Rafael Nadal, Roger Federer and Andy Murray to reach this stage at all four Grand Slams.

He is a major winner, too, having won Flushing Meadows back in 2014 and was a Wimbledon finalist three years later. He also knows how to win on grass having lifted the Queen’s Club trophy in 2012 and 2018 – reaching the final in 2013 and 2017. Last year he won in Stuttgart.

Rafael Nadal vs John Millman live stream: How to watch US Open match online and on TV

Johanna Konta is off on a 1,100-MILE road trip around America

How significant is Roger Federer's first win over Novak Djokovic in four years?