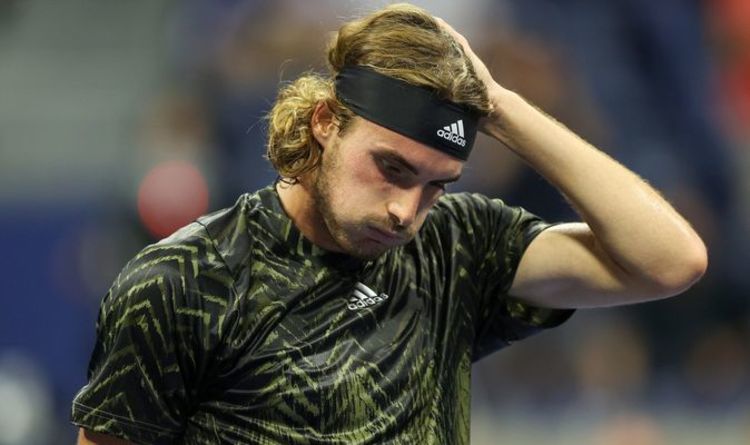 Stefanos Tsitsipas was left embarrassed after trying to take a swipe at Andy Murray in their US Open bathroom break feud. The Brit slammed the world No 3 when he took an eight-minute toilet break during their first round match, calling it “cheating” as he fumed during the final set and later admitting he “lost respect” for his opponent. Following his second round victory, Tsitsipas hit back after spending days at the centre of controversy over his lengthy off-court breaks but was immediately shut down by a reporter after trying to prove Murray had done the same earlier in his career.

Tsitsipas’ prolonged bathroom break has been the talk of the tennis world in recent days, after Murray was left visibly furious throughout the fifth and final set of their opening round clash on Monday.

The former world No 1 criticised the Greek after the match, questioning how much of a coincidence his moments of choice for stopping the match were, and saying: “It was nonsense and he knows it.”

The debate on the length of toilet breaks and whether a time limit should be introduced only intensified as the third seed proceeded to leave the court for more than seven minutes in a second successive match, after dropping the third set to Adrian Mannarino in round two.

Tsitsipas has found himself inundated with questions over his prolonged comfort breaks in recent days, and took the chance to hit back following his second round victory on Wednesday.

While Murray has been outspoken over the need for shorter breaks, Tsitsipas noted that the current world No 112 had himself taken a bathroom break during his 2012 US Open final victory.

The recent Roland Garros runner-up spoke up in his post-match press confence, questioning the former champion’s decision to leave the court during his final nine years ago while criticising Tsitsipas for a lengthy break.

“I have a question for you. I don’t watch other people’s business but I remember watching it when I was younger. Can you please check when Andy Murray faced Novak Djokovic at the final here, before the fifth set, that break, can you please look it up and let me know next time?” the world No 3 asked, according to Times Sport reporter Stuart Fraser.

The reporter immediately confirmed they had already checked the length of Murray’s absence from the court in the 2012 final, saying: “I did. He took less than three minutes.”

The 23-year-old was left somewhat humiliated that he was unable to make the point he hoped to, simply replying with: “Less than three minutes okay.”

The Brit famously briefly left the court ahead of the fifth set of his US Open final nine years ago, having been two sets up on Novak Djokovic before losing sets three and four.

He has previously spoken about how he was able to reset and give himself a quick pep talk while in the bathroom, before coming out and capturing his maiden Grand Slam title.

While Tsitsipas, and many others on social media that have jumped to his defence in recent days, have been questioning Murray for criticising the Greek while doing the same, the point has fallen short as the 34-year-old admitted his issue was the length of the breaks, rather than the breaks themelves.

Speaking after falling to Tsitsipas in five sets on Monday, he said: “It’s not so much leaving the court. It’s the amount of time.”

The 23-year-old already had a reputation for taking prolonged off-court breaks at often-crucial moments of matches in the past, drawing criticism just weeks ago when he left the court during his Cincinnati Masters clash with Alexander Zverev and taking his bag with him as his dad could be seen texting in the stands, leaving Zverev questioning what his opponent was really doing in the bathroom.

Murray himself admitted he had been mentally prepared for the Greek to use the tactic and even discussed it with his team before the match but said his issue was the physical effects, as he explained the body starts to cool down during an eight-minute stoppage.

Tsitsipas’ most recent opponent Mannarino also spoke out on the matter when he found himself waiting on the third seed during their match, and was seen asking for balls so he could practice his serves to stay warm.

The Frenchman called on the rules to be changed, pointing out that the seven-time title winner couldn’t be stopped if there was no time limit on the comfort breaks.

“He’s not doing anything wrong, I think the rule is wrong,” the world No 44 said.

“I read that it was his routine to take a break. In this case, it’s more unsportsmanlike conduct. So many players use this little tool to break down rhythm.”