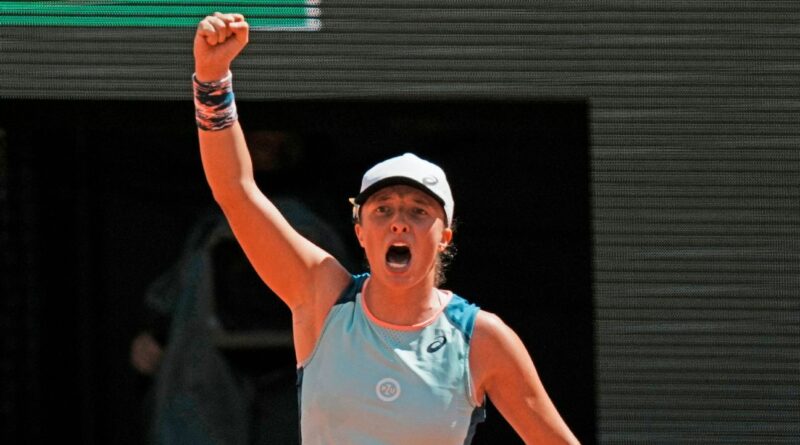 PARIS — Top-ranked Iga Swiatek won her 33rd match in a row with a 6-3, 6-2 victory over 11th-seeded Jessica Pegula to advance to the semifinals of the French Open.

The 21-year-old Swiatek will next face Daria Kasatkina of Russia for a spot in the final.

Swiatek gained from what appeared to be a missed call in the seventh game of the first set. She chased down Pegula’s drop shot but it appeared to have bounced twice before she hit her winner to break and take a 4-3 lead.

At one point, Pegula complained to the chair umpire about Swiatek’s alleged delaying tactics between serves.

Swiatek, who won the 2020 French Open, had also beaten the American earlier in her winning streak.

The Polish player has won her past five tournaments, going unbeaten since February for the WTA’s longest such stretch since Serena Williams compiled a 34-match run in 2013.

Swiatek was aggressive throughout the match, compiling 30 winners though she had 28 unforced errors as well. She clinched it on her fourth match point.

Daria Kasatkina advanced to her first Grand Slam semifinal with a 6-4, 7-6 (5) win over Veronika Kudermetova at Roland Garros.

The 20th-seeded Kasatkina will next face either top-ranked Iga Swiatek or 11th-seeded Jessica Pegula.

In a quarterfinal matchup of 25-year-old Russians, Kasatkina built a 6-1 lead in the tiebreaker and finally clinched it on her fifth match point, beating Kudermetova with a backhand drop shot.

The 29th-seeded Kudermetova took a medical timeout to have her left foot taped after she held for a 6-5 lead in the second set. But she then lost nine of the next 10 points before her brief comeback in the tiebreaker.

Kasatkina has not dropped a set in her Roland Garros run. She hit only 16 winners but Kudermetova made 50 unforced errors – twice as many as Kasatkina.