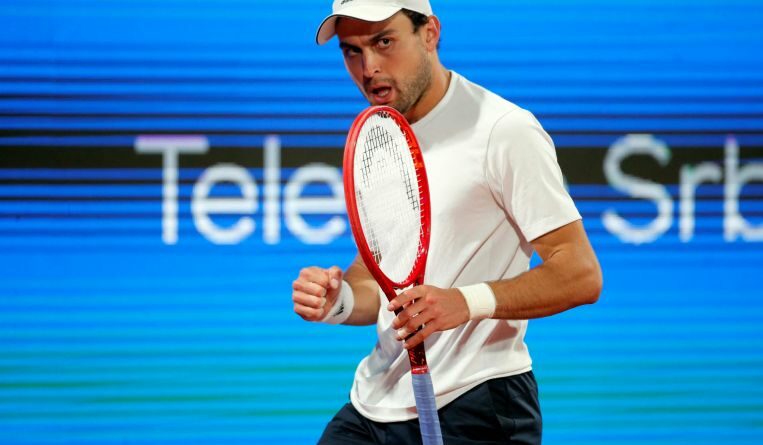 BELGRADE (REUTERS, AFP) – Novak Djokovic crashed out of his own tournament after Russia’s Aslan Karatsev beat him 7-5, 4-6, 6-4 on Saturday (April 24) to reach the Serbia Open final and avenge the Australian Open semi-final defeat by the world No. 1.

Djokovic suffered his second successive shock exit on red clay in quick succession after he was beaten by Briton Dan Evans in the third round of the Monte Carlo Masters last week, having failed to convert a barrage of break points against Karatsev.

The Russian will meet Matteo Berrettini in Sunday’s final after the Italian beat Japanese world No. 126 Taro Daniel 6-1, 6-7 (5-7), 6-0 in the other semi-final at Djokovic’s tennis centre by the Danube river in Belgrade.

The Serb, the 2009 and 2011 champion at the event which is played at a venue which carries his name, surrendered a 3-0 advantage in the opening set as he dropped serve three times.

He then fell 4-2 behind in the second but summoned his well-documented powers of recovery to win four straight games and send the match to a deciding set.

Dubai champion Karatsev fended off eight break points in the third set before winning Djokovic’s service game to move 4-3 ahead and leave the top seed on the brink.

Djokovic saved a match point down at 5-3 to force Karatsev to serve it out. The third seed saved two further break points as he completed a landmark win after 3hr 25min.

Djokovic praised Karatsev after what he said was a forgettable evening.

“Hats off to Karatsev, he was bold and deserved to win,” the tournament host told an online news conference, revealing that he felt “dizzy” in the third set.

“I will probably not be able to recollect all the memorable rallies in this match because I lost. I am not happy with my performance, I put up a fight but he delivered great shots every time he needed to.

“I was unlucky at times, it all came down to one or two shots but I had too many ups and downs throughout the match.”

The 28th-ranked Karatsev, who saved 23 of 28 break points to advance to his second final of the year, said: “You have to put (in) like 200 per cent to beat this guy… I’m really happy, I put everything on the court. The match was long. I’m really happy with my performance today.

“This is the most important victory of my career. At the Australian Open in Melbourne, I felt like I was playing against a wall but this is a different surface and I was focused.”

Djokovic is registered for the Madrid Open but did not confirm whether he would play at the May 2-9 Masters-level event which will feature reigning French Open champion Rafael Nadal.

“Roland Garros is the main goal but I need to play better if I’m thinking about doing something there. I have a lot of work ahead of me,” said the 18-time Grand Slam champion.