Home » Tennis » The Kyrgios difference: a style of his own

Is there another player on tour, who twice – in a semi-final and final in Washington last year – would ask a fan to suggest where he serves on match point, and then successfully follow the spectator's sage advice? 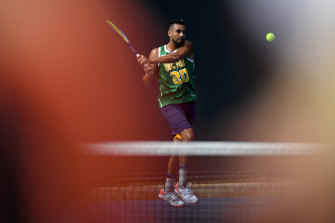 Main attraction: Nick Kyrgios is unique, both on and off the court.Credit:AAP

To say that Kyrgios is "different" is akin to saying that Rafael Nadal – a player Kyrgios likes to beat but doesn't like much – is a good clay-courter, or that John McEnroe had a vexed relationship with officials.

What is less appreciated by the public is that Kyrgios stands apart from the pack, too, in terms of how he plays the sport.

John Newcombe, who's seen every notable player since the 1960s, reckoned he had never seen anyone with Kyrgios' style of game.

The Kyrgios point of difference, so to speak, isn't simply that he serves underarm on occasion to flat-foot an opponent (and perhaps to entertain himself), or that he plays more "tweeners" – hitting the ball between his legs – than just about anyone else in a grimly risk-averse, professional sport.

No, while he shares shot-making traits with other players – including the infinitely more accomplished and consistent Federer – the Kyrgios package is quite distinctive.

Some facets of his game stand out like his hairstyle, such as that monster serve. Other parts are less conspicuous – for instance, unlike Nadal, who has an idiosyncratic routine that involves many bounces and a tug of his shorts before serving, Kyrgios hustles quickly between points, averaging just 16.4 seconds before the next serve (one of the fastest on tour).

"He certainly doesn't bounce the ball 25 times," Newcombe said. As Tennis Australia's head of innovation Machar Reid observed, this lack of pause between points can add to his unpredictability.

Kyrgios prefers to play shorter points, and he expends less energy – 6.3 kilojoules a shot – than the average player (6.7 kilojoules). Federer, viewed as a model of efficiency, uses 7.1 kilojoules per shot.

In theory, this should allow Kyrgios to finish strongly, but of course, he would have to be physically fit enough to take full toll of his low-emission style.

As Newcombe notes, Kyrgios hits the ball "flatter" than the regulation player, especially on his backhand. "It's not the traditional groundstrokes that he plays."

In commentary during Kyrgios' opening-round victory over Lorenzo Sonego, Jim Courier described the two-handed Kyrgios backhand as "a shock absorber" in that he didn't need to take a full swing.

"Incredible ability to absorb pace and re-direct," was Reid's short summary of the Kyrgios backhand.
Kyrgios differs from many players in that his backhand is the more reliable side, even though he hits heavier forehands, having cranked one at 178km/h, the fourth quickest at the Australian Open over the past four years.

Interestingly, one of Kyrgios' most predictable methods – his unwavering ball toss, always the same – creates unpredictability for his opponent, because, as Courier noted in the Nine broadcast, it's harder to read where he'll direct the serve.

On return of serve, Kyrgios is unusually aggressive. He stands inside the court (contrast to Nadal) and takes the ball early, almost always returning serve with the ball on the rise.

This method is duplicated in his groundstrokes. He hits 53 per cent of these shots, on both sides, on the rise, compared to Nadal's 45 per cent, Novak Djokovic's 44 per cent and Daniil Medvedev's 41 per cent. Federer, significantly, averages a remarkable 63 per cent of his shots on the rise.

The Kyrgios serve, obviously, is among the most potent in the game, ranked seventh for his serve-winning percentage on tour last year. His serve value – a more complete measure of serving, provided by Machar Reid – was fifth in the opening round.

But – in perhaps a pointer to where he could gain ground – his second serve ranked only 48th for effectiveness on tour (winning percentage) despite the incredible power he possessed.

Opinions vary on whether Kyrgios ought to persist with his unorthodox "tweeners" in matches that matter. Paul Annacone, former coach of Federer and Pete Sampras, believed these shots helped Kyrgios relax "and break tension", which was a positive. "Obviously, it depends on when he uses them."

Newcombe was less enthusiastic about those Kyrgiosic shots. "I think he should probably leave them in the cupboard," he said.