Ajla Tomljanovic was the lone Australian to progress to the second round of the WTA green-clay tournament in South Carolina.

The 14th-seeded Tomljanovic cruised in the first set of her opening match but was pushed to a tiebreaker before she accounted for Polish world No.85 Magda Linette 6-2, 7-6 (9-7). 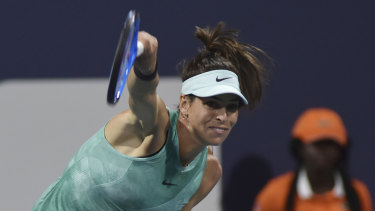 Tomljanovic will face Slovenian world No.64 Tamara Zidansek in the round of 32.

Melbourne's Destanee Aiava was outclassed by ninth-seeded Belinda Bencic in their first-round encounter, the Swiss steamrolling her way past the teenage qualifier in less than an hour, 6-3, 6-0.

Aiava crushed 15 winners, four more than Bencic, but the 18-year-old Australian was undone by 24 unforced errors, three times more than her opponent.

In the late match, Astra Sharma could not maintain the winning form that got her through qualifying as she succumbed to unseeded American Taylor Townsend 3-6, 6-2, 6-3.

Other seeded players to win their way to the second round were 10th-seeded Jelena Ostapenko of Latvia and American 13th seed Sofia Kenin.