One of the most fascinating experiences of my journalistic life was following Martina Navratilova during her progress through Wimbledon in 1987 – the year when Pat Cash won the men’s half of that event. 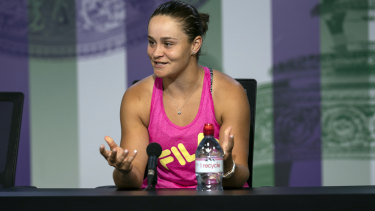 “The sun’s still going to come up tomorrow” … Australia’s Ashleigh Barty at her press conference after losing to Alison Riske at Wimbledon.Credit:Adam Warner, AELTC, via AP

Cash was a great sportsman but hopeless in talking to the media. Navratilova was that rare creature – a player who could verbalise what’s going through her brain and her body as she was winning, who could keep journalists enthralled by her wordplay as much as by her courtplay. She was an intellectual as well as an athlete.

There’s been nobody as articulate in tennis since – until Ash Barty. She may one day surpass Navratilova’s achievements on the court (18 Grand Slam singles victories), but off the court she’s already Navratilova’s equal in commanding the pressroom. And although she’s now out of the Wimbledon race, we’ll need to brush up our cultural literacy for her arrival at the US Open on August 27.

One of her tools is sly insertion of popular-culture references to explain her motivations, using quotes such as “To infinity and beyond” from Toy Story, “The seaweed is always greener in someone else's lake” from The Little Mermaid, and “The sun will come up tomorrow” from Annie (as she did on Monday night after Alison Riske ended her Wimbledon dream).

If Barty sticks with Disney, we can expect "Believe you can, then you will" (Mulan); "Even miracles take a little time" (Cinderella); and "I give myself very good advice, but I very seldom follow it" (Alice in Wonderland).

But that would be predictable, and Barty is not. At the US Open, I think she’ll move on to Warner Bros cartoons and Marvel and DC comics. If she says, “I know this defies the law of gravity, but I never studied law!” or “Watch me paste that pathetic palooka with a powerful, pachydermous, percussion pitch”, she’ll be channelling Bugs Bunny.

If she says, “Consequences, schmonsequences, as long as I’m rich”, she’s Daffy Duck. If she says an opponent has “more nerve than a bum tooth” or is “about as sharp as a sack of wet mice”, she’s Foghorn Leghorn.

If she says “Higher, further, faster, baby”, she’s inspired by Captain Marvel. If she says “My mother told me, ‘You are stronger than you believe, you have greater powers than you know’”, she’ll be Wonder Woman.

And if she ever loses again, she’ll draw on the wisdom of The Black Widow (Avengers): “If you're about to tell me to look on the bright side, I'm about to hit you in the head with a peanut butter sandwich.”

David Dale is a journalist. 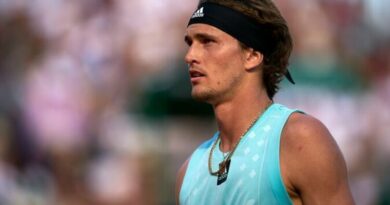 Kyrgios to begin probationary period with ban looming over him