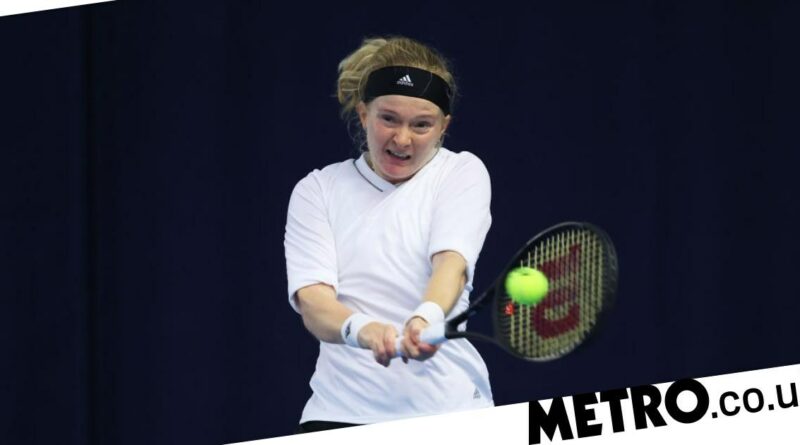 After qualifying for the Australian Open, Francesca Jones picked up the phone to her parents.

Not many words were exchanged. There were tears, screams and the family dog barking in the background of their home in Weybridge.

This was, on the one hand, the end of a long journey – against the odds – to reach the upper echelons of the tennis world. On the other, it could be the very beginning of an even more remarkable path yet to be trodden.

Jones, born in Bradford, left home at the age of nine for Barcelona where she trained at the Sanchez Casale Academy until she was 16.

Her development was very different to others training at the academy. The 20-year-old was born with ectrodactyly ectodermal dysplasia syndrome – a rare condition that causes developmental problems for feet and hands.

Jones has three fingers and a thumb on each hand and seven toes – four on her left foot and three on her right. She struggled with her balance growing up and had difficulties gripping the racquet properly.

Doctors were clear in their assessment: she would never play professional tennis.

To those with the inner drive required to make it in elite sport, such a statement is often music to their ears. Britain’s finest tennis export Andy Murray, for example, has always thrived when he believes he is proving someone wrong.

For Jones, it’s a different story.

‘You could say I prove the doctors wrong and I am sure a good few other people as well,’ she says after a resounding 6-0 6-1 win over China’s Jia-Jing Lu. ‘You know what? I am not bothered about proving people wrong, I’d rather prove to people you can and switch the perspective there.

‘The first one is out of revenge and I am not playing out of revenge. I am playing to have a positive impact out of the people who hopefully read my story.’

Her tenacity is clear for all to see on court. Experienced Romanian Monica Niculescu, who has been as high as 28 in the world rankings, and Croatia’s Jana Fett – a former top-100 player – were both dispatched in Jones’s first taste of Grand Slam qualifying.

In unusual circumstances, the women’s qualifying tournament took place in Dubai – the men competed in Doha – with those successful, including Jones, set to be jetted in to Melbourne for the first Grand Slam of 2021.

This is undoubtedly the high point of her young career – she is now on the cusp of the world’s top-200 and £55,000 richer – and any lows she has experienced have been forgotten, or better still, used to her advantage.

‘I mean I wouldn’t say I have ever reached a low point due to my syndrome,’ says Jones. ‘I start by what I have said previously which is I try to use it as a positive and I see it as an advantage in many ways.