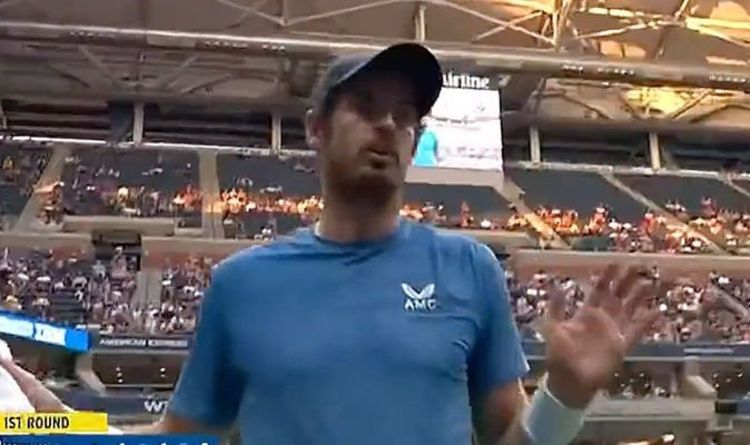 Andy Murray got into a verbal clash with the US Open supervisor Gerry Armstrong as he complained of Stefanos Tsisipas’ long toilet breaks. The Scottish champion challenged the repeated interruptions, claiming the length of the break was difficult to justify due to the toilets being very close to the court. Murray’s complaints were caught on video as he argued with the supervisor.

“And the toilet is right there – what is he doing? What’s he doing in there?

“It’s never once taken me that long to go to the toilet, ever. When it’s right there.

JUST IN: Nick Kyrgios has meltdown over towels during US Open loss to Roberto Bautista Agut

Murray went on to suggest Tsisipas’ toilet breaks were an attempt to shift momentum from the match.

The world’s former number 1 later said he lost “respect” for his Greek opponent, telling the press after his defeat: “It’s not so much leaving the court. It’s the amount of time.

“I spoke to my team before the match about it and said [we should] prepare for it if things were not going his way.

The issue is that you cannot stop the way that that affects you physically. When you’re playing a brutal match like that, [and you are] stopping for seven [or] eight minutes, you do cool down.”

Murray continued: “Every single time it was before my serve as well. I think when he took the medical time-out, it was just after I had won the third set.

“Also in the fourth set, when I had 0-30, he chose to go. I don’t know if he changed his racket or what he was doing.

“But, yeah, it can’t be a coincidence that it’s happening at those moments. I don’t believe it [the foot that Tsitsipas had treated after the third set] was causing him any issue at all.

“The match went on for another two-and-a-bit hour after that or something. He was fine, moving great I thought.

“It’s just disappointing because I feel it influenced the outcome of the match.

“I’m not saying I necessarily win that match, for sure, but it had influence on what was happening after those breaks.