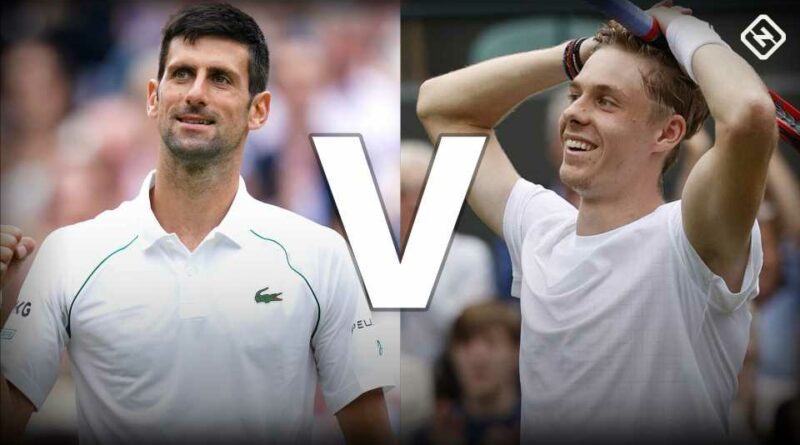 The match marks the seventh meeting between the two, with the Serbian winning all six prior matches, four via straight sets. However, those matches were either on hard courts or clay. In 2019, the duo met at The Boodles, an exhibition on grass, and Shapovalov walked away a 7-6(3), 6-4 winner.

Djokovic, the defending champ and a five-time winner at Wimbledon, is aiming for his 20th Grand Slam title. He has already won two of the four Grand Slam events in 2021, having taken the Australian and French Open titles. Shapovalov also has a Wimbledon title to his name; he won the boys’ title in 2016.

Here’s everything you need to know to watch these two battle it out in The Championship semifinals.

What channel will carry Novak Djokovic vs. Denis Shapovalov?

Both semifinals, starting with 14th-seeded Hubert Hurkacz facing No. 7 seed Matteo Berrettini at 8:30 a.m. ET, will be shown on ESPN in the United States. Fans in Canada can watch on TSN3 and TSN4.

Djokovic and Shapovalov are expected to start at 10:30 a.m. ET, although the first match could impact when their match gets underway.

For those who want to stream the matches, ESPN3 and ESPN+ through the ESPN app will have access, as will fuboTV. A subscription to fuboTV offers a free seven-day trial. In Canada, live stream access will be available on TSN.ca or the TSN App.

When is the Wimbledon final?

The winner of Djokovic vs. Shapovalov will face Berrettini or Hurkacz in the final. It is scheduled for Sunday, July 11, at approximately 9 a.m. ET.

What is the prize for the 2021 Wimbledon winner?

The Wimbledon winner will not only walk away with strawberries and cream, but also with approximately $2 million. That figure represents a 27.7 percent decrease from the winner’s prize in 2019, the last year the tournament was held. The runner-up will receive about $1.07 million. The semifinal losers will receive about $551,000 each.

My predictions for Wimbledon and what I want to see most