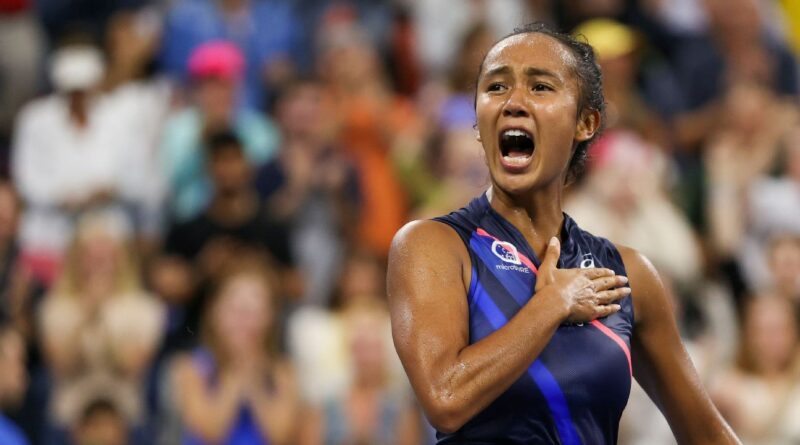 NEW YORK — Leylah Fernandez was down a set and a break — 4-6, 2-4 — against 2016 US Open champion Angelique Kerber on Sunday, and the scorecard suggested that the teenager’s dream run was probably going to end soon.

Still, Fernandez’s eyes glinted. She served with abandon, faster and more precise. Her forehand crosscourt shots got more angular. She forced a third set, punching her fist in the air every time she won a point.

Although she upset four-time Grand Slam champion Naomi Osaka in the third round, the third set against Kerber was one of her best in the tournament. She broke Kerber once, and then twice. Each time, she let out a roar, a deep-throated scream, raising her arms and asking the crowd, which was screaming with her, to get louder. Kerber looked gassed, while Fernandez looked her most alive in the entire match.

“I’m not surprised of anything that’s happening right now,” Fernandez said after her thrilling 4-6, 7-6 (5), 6-2 win against the former world No. 1. “I’m just glad that it’s happening now and not later in the year.”

A day before her 19th birthday, Fernandez, who played her first Grand Slam just a year ago at the Australian Open, reached her first major quarterfinals, becoming only the fourth Canadian woman to do so at the US Open in Open era history, beating two former world No. 1s in the process.

The tennis world first took notice of her at the 2020 French Open when Fernandez came close to winning a set against Petra Kvitova. But she truly became an overnight sensation after winning the biggest match of her career against Osaka in New York this week. She now has the chance to make even bigger waves in her quarterfinal match against No. 5 seed Elina Svitolina on Tuesday.

So, how did Fernandez get here? It started with a soccer-playing father and a family that instilled belief in her.

Born in Montreal to an Ecuadorian father, Jorge, and Filipino-Canadian mother, Irene, Leylah first fell in love with the sport at age 6. When she did, Jorge was ready to nurture her. Jorge’s approach of “Let go of the past, keep looking forward, keep looking for the next,” shaped how his daughter played the sport, said Rennae Stubbs, an ESPN analyst and former player who has spoken to Fernandez and her family.

Jorge didn’t know much about tennis, but when Leylah wanted to play more seriously at age 10, he was all in. Taking inspiration from Serena and Venus Williams’ father, Richard, who knew very little about the sport but ended up coaching his daughters, he did the same, bringing his knowledge from soccer.

“I felt she was special right from the start,” Bianca Andreescu’s former coach and the person in charge of Team Canada’s women’s side, Sylvain Bruneau, told ESPN in December 2020. “It was refreshing to watch her because she was playing with so much action on the ball and she was able to do so many different things.”

When Fernandez was 14, the family relocated to Florida, where Jorge trained Leylah. At 16, Leylah played at the 2018 Junior French Open, losing in the semifinals to American Coco Gauff. A year later — after a quarterfinal appearance in the US Open Juniors and a semifinal run at the Australian Open Juniors — she won her first major junior title at the French Open. She turned pro in 2019.

The bone-deep belief she has in herself is “100 percent her father,” Stubbs said.

“He has sort of like a military training regimen, and similar to Tiger Woods’ father who said, ‘This is how we train, we train to be great.’ If you constantly are expressing that — your expectation should be, ‘Yeah, I’ve been training for this.'”

“From a very young age, I knew I was able to beat anyone who is in front of me,” Fernandez said after her win against Osaka on Friday. “Even playing different sports, I was always that competitive, saying, ‘I’m going to win against them, I’m going to win against my dad in soccer,’ even though that’s impossible. I’ve always tried to use that in every match that I go on.”

Fernandez has broken out over the past 11 months. She started by making the final of the Mexican Open, then made a splash by reaching the third round of the French Open. She shocked the tennis world by winning the Monterrey Open without dropping a single set through the entire event. She beat former top-10 players Belinda Bencic and Sloane Stephens.

If there was one moment that propelled her to the US Open quarterfinals, it was the third-round match at the 2020 French Open, which was held in October due to the pandemic. Fernandez was up 5-1 in the first set of a third-round match against Kvitova, the two-time Grand Slam champion and another left-hander on tour. Fernandez’s inexperience and Kvitova’s speed proved too much in a 5-7, 3-6 loss, one from which she learned.

“As the last match of the year, that gave us an idea of how we need to train for next season so that when I do play against [Kvitova], or players like her, in the future, I would know what to do,” she told ESPN in December 2020.

Eleven months later — up 5-2 in the third set against Kerber, another champion, another left-hander — she knew exactly how to finish her off.

“I was a little worried that Leylah might be trying to go for a little bit too much too early in the point because that’s what Angie forces you to do, but the fact that she played the smart shots in those moments is recognition of the training she’s done,” Stubbs said. “She does the right thing at the right time, and that’s pretty extraordinary for somebody of her age.”

Kerber saw a lot of her own game in Fernandez’s: the deep, left-handed serve that draws opponents to the edge of the court, and the first shot after the serve, a straight forehand ripper.

Kerber’s favorite shot is her forehand down the line, and Fernandez outplayed her, showing more power than Kerber. Though Kerber is stronger and more defensive-minded, Fernandez plays offensive tennis, said former Wimbledon semifinalist Alexandra Stevenson, who had a dream run of her own in 1999.

“In the third set, you could see the momentum shift and that forehand, it’s very dangerous, and as well as her backhand,” Stevenson said. “For a leftie, they love their forehand, but their backhand isn’t as strong, but Leylah’s backhand is strong. She steps in and uses her body and she moves forward at an angle and really hits that backhand well.”

One thing Jorge instilled in his daughter that has resonated this week: No win is too great. Leylah said her first “come-back-to-earth” moment was her family and team asking her not to get too hyped up just because she beat Osaka — it was still the third round and she had a long way to go.

“Often, kids at 18 or 19, they win a match like that and it’s the greatest thing in the world for them,” Stubbs said. “So, you need people around you … who can say, ‘That’s great, but we’ve got more work to do,’ and it’s really important to teach young people that because they don’t have the experience.”

If last week’s performance is any indication, Fernandez is going to “put on a show” — as she has said in the past — against her quarterfinal opponent, Svitolina, who is coming off a dominant win against former French Open and Wimbledon champion Simona Halep. Fernandez and Svitolina have played only once, Svitolina winning in straight sets in March 2020 in Monterrey. But Fernandez’s game has dramatically improved since.

“She was striking the ball already good there, it was a tough match for me,” Svitolina said of the Monterrey encounter. “I really saw in that time that she can play great tennis. Right now, we can see that she improved. She started to believe more in herself. Beating Naomi, it’s a good sign that she’s playing well.”

Fernandez said she has polished her game consistently over the past year. And she knew it was just a matter of time before everything clicked.