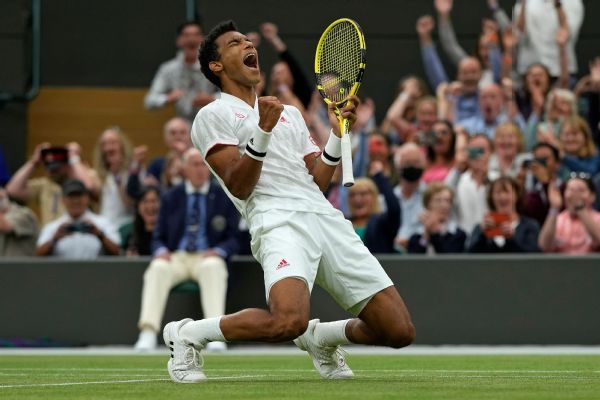 LONDON — There has been little on-court respect given to age, reputation and rankings at this year’s Wimbledon. Young breakthrough players are knocking over their heroes, wonderfully astonished at their own achievement.

Some then give the steely-eyed stare as they talk resolutely about their chances of success. Others, like Felix Auger-Aliassime, just smile while reflecting on what they’ve achieved this year, and what’s to come.

“I’m a normal guy from Montreal, Canada, and here I am,” the 20-year-old said in his on-court interview after beating Alexander Zverev on Monday to reach his first Grand Slam quarterfinal.

Auger-Aliassime never thought he’d be on the same patch as Roger Federer. He remembers being 5 years old watching the man born on the same day as him — 19 years apart — turn the tennis world on its head in the mid-2000s. Auger-Aliassime went on to make a dent in the ATP rankings, and then beat his hero, Federer, at the Halle Open last month. The firsts keep on coming for Auger-Aliassime, and he’s breaking new ground here at Wimbledon.

For the first time in Grand Slam history, Canada has two players in the final eight of the men’s singles: Auger-Aliassime and Denis Shapovalov. They’re different players, but good friends. They’ve barely seen each other at Wimbledon because they’re on different sides of the draw, but could meet in the final. Their praise for one another is delightfully understated — but Shapovalov said his friend Auger-Aliassime “has definitely improved his game quite a lot and he’s at a really good level right now.”

Auger-Aliassime has been an up-and-comer in tennis for a while. Wimbledon finalist and fellow Canadian Milos Raonic earmarked him in 2014 as someone to watch, tweeting: “Inspiring to see what Felix Auger-Aliassime is doing at only 14 years old. He is going to be fun to follow.”

Auger-Aliassime would take the 2016 US Open boys’ singles title, and then reached the final of the 2016 equivalent at Roland Garros.

“I think a lot of people have recognized his talent for quite a while,” ESPN analyst James Blake said. “I remember even seeing him play in the junior US Open final and thinking this guy has got talent, he will be the future, a future star.”

Federer practiced with him in 2017 in Dubai and said, “He was a joy to work with.” Andy Roddick in 2019 compared Auger-Aliassime’s movement to that of a young Lleyton Hewitt or Rafael Nadal.

In May 2019, Auger-Aliassime became the youngest top-25 player in the world since Hewitt in 1999. He has reached eight ATP finals, only to lose them all. But Blake said that shouldn’t be overlooked purely because of lack of hardware.

“That’s pretty darn impressive,” Blake said. “He has done a lot of good things and I’m sure he would have liked to have held up one of those trophies to have a title on the tour by now, but I do believe there will be plenty in the future.”

Part of the reason behind Auger-Aliassime’s breakthrough were the benefits of bringing Toni Nadal onto his staff. Toni worked with his nephew, Rafa, earlier in his career, and in December 2020, Auger-Aliassime went to the Rafa Nadal Academy in Mallorca and worked with Toni. By April, the partnership was rubber-stamped.

“Even with Toni, I’m still the same player with the same mentality, but I’m just trying to improve a little bit every day,” he said in April.

Alongside consistency, Blake has seen other improvements in Auger-Aliassime’s game.

“I feel like he has served pretty well,” Blake said. “He’s always had a pretty big serve, but I think for the last couple of years he has maybe tinkered a little with his toss because that is the thing that would go off and lead to a few too many double faults. But it seems to be more locked in now. He’s got big ground strokes, he moves really well.”

Blake said he would like to see him work on his defense a little more, but added, “It is always going to be necessary, but it’s not as big a deal because you’re playing more first-strike tennis, and he’s just been really good at that.”

All of that has contributed to this run at Wimbledon. He opened the championship with a straight-sets win over Thiago Monteiro (6-3, 6-3, 6-3), and then a four-set win over Mikael Ymer (6-4, 4-6, 7-6 (4), 6-1). His eagerly anticipated third-round match with Nick Kyrgios was halted during the second set as Kyrgios withdrew because of injury. Kyrgios said he was impressed by Auger-Aliassime.

“I always have been a massive fan of Auger-Aliassime. I think he’s got the platform and the game to really push this sport into, you know, something really exciting again,” Kyrgios said. “I’ve got nothing but respect for him. He’s a hell of a player. He’ll be a Grand Slam champion one day I’m sure and he’s going to do some special things.”

“To do it here and jump over that huge hurdle to get to a quarterfinal against a top player like Zverev is big,” Blake said. “You saw his emotions when he won that and how much it meant. It’s a big moment mentally and sometimes that can be a watershed moment: ‘OK, now the pressure is off, and I can play even freer.’

“Because he does look like he can be a little tense out there, so to see he can play with a little more freedom and a little bit more relaxed, I think it is dangerous for the rest of the guys. He is dangerous.”

Auger-Aliassime was all smiles after the match.

“It’s a big milestone for me in my young career,” he said.

His success here also has been due to a shift in mentality. He has spoken about pressure in the past, saying in 2020 he found the previous year’s Wimbledon a formidable task.

“I felt a bit of vertigo before Wimbledon,” he said in 2020. “I had made the final in Stuttgart, a semifinal at Queen’s. And arriving at Wimbledon I heard people say that I was pretty much among the favorites for the title. I told myself to calm down. It stressed me out a little. I must adapt to this new life, to these new pressures. For the time being, I have been lucky that these periods of adaptation are rather short-lived, but they are still there.”

Part of the battle is also developing interests outside the game. Auger-Aliassime plays the piano, became an avid fan of Scrabble during lockdown and also does charity work. He donates $5 for every point he wins to Educhange, which supports the protection and education of children in Togo, where his father, Sam, was raised.

Blake said he thinks the strong Canadian contingent here is a contributing factor to Auger-Aliassime playing without fear.

“I do think for someone like him it may help that Canadian tennis is doing so well,” Blake said. “You have Shapovalov doing so well. Raonic has been injured for a while but led the way for these guys. Even [Vasek] Pospisil is doing well, so to have company and not everyone all-consuming focused on him I think is a good thing.”

While Auger-Aliassime has a strong bond with the Canadian contingent, he now faces one of his best friends on the tour in Italy’s Matteo Berrettini in Wednesday’s quarterfinals. The two are close on and off the court, with Berrettini dating Wimbledon quarterfinalist Ajla Tomljanovic, and her cousin Nina Ghaibi dating Auger-Aliassime. The four have a strong bond, as Tomljanovic detailed after her fourth-round win on Monday.

“After we won, all three of us passed each other in the hallway. I was so happy for [Auger-Aliassime] because he, like, is everything, like how he goes about the sport is unbelievable,” she said. “He wants it so much. He loves everything about it. To see him do well, it makes me so happy. I gave him a fist pump, like, yay, Felix. I think they also hugged. I’m happy one of them will be through on Wednesday.”

Auger-Aliassime said he is just looking forward to playing against his pal.

“I think it’s good to get to play each other,” he said. “We both have had a great tournament so far. We’ll try to leave it all out there, and it’s going to be good. It’s good to see some new faces in the quarterfinals. I’m happy to be part of it.”