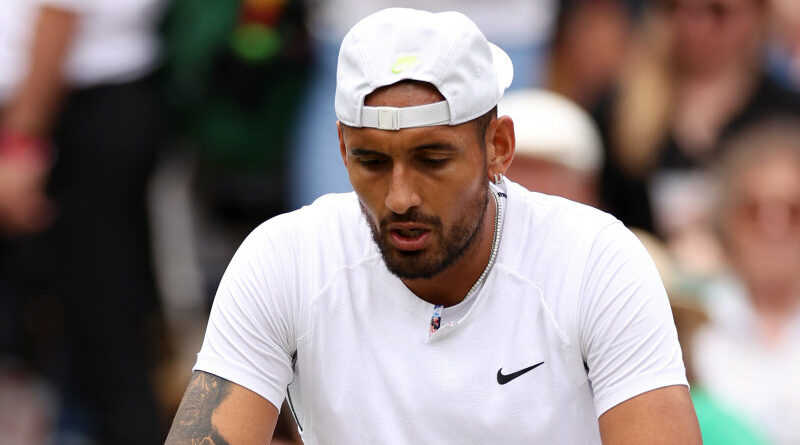 London: Nick Kyrgios maintains his match preparation was in no way affected by news that emerged midway through his Wimbledon campaign that he would soon face court in Australia accused of assaulting his former girlfriend.

Having got over the hump of never reaching a major semi-final until now, Kyrgios again revealed his deep personal satisfaction at snapping his hoodoo and advancing to what is easily a career-best grand slam finish seven years since he last played one of his two previous quarter-finals. 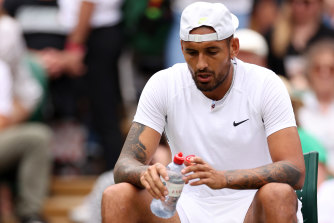 Nick Kyrgios during his match against Cristian Garin of Chile.Credit:Getty

In the immediate aftermath of a 6-4, 6-3, 7-6 quarter-final elimination of Chilean Cristian Garin – a match Kyrgios described as deceptively difficult – the 27-year-old Australian sat in his courtside chair and took in the moment.

“I thought my ship had sailed,” a candid and emotional Kyrgios told the packed court one crowd.

“Honestly, I didn’t go about things great earlier in my career and I thought I may have wasted that little window.”

Later expanding on his “rocky” near-decade in the sport that has seen his progression from teen sensation to one of the most controversial figures in tennis history, Kyrgios said: “There was a point where I was almost done with the sport.“

Next up is a mouth-watering semi clash against Rafael Nadal. Of course, Kyrgios has to beat Nadal – a tennis legend only nine major wins away from the ever-elusive grand slam – to claim Wimbledon.

Kyrgios was tight-lipped about his personal situation. He is summoned to appear at the ACT Magistrates Court on August 2 on an allegation of common assault against his former girlfriend Chiara Passari.

“I have a lot of thoughts, a lot of things I want to say, kind of my side about it,” said Kyrgios.

“I’ve been advised by my lawyers that I’m unable to say anything at this time.

“Look, I understand everyone wants to kind of ask about it and all that, but I can’t give you too much on that right now.”

The news broke at Wimbledon little more than 24 before Kyrgios was due on court against Garin, ranked 43 in the world and a fellow unseeded player who he was widely expected to beat.

But the Canberran said he was able to adequately block everything off-court out of his mind.

“[It] didn’t really affect me at all, to be honest with you,” Kyrgios said.

“I read about it and obviously everyone else was asking questions. It was hard. It was hard to kind of just focus on kind of the mission at hand.

“[But it] was [the] quarter-finals of Wimbledon today. I know deep down that’s what I was prepared for.

“I knew I stayed true to myself … [and that I would] give my best performance today.”

The two hour and 13 minute victory was undeniably admirable, combustible Kyrgios limiting the theatrics, in contrast to two of his matches in particular on the London grass this year. However, those in his player’s box were regularly in his sights on Wednesday.

He was busy reminding them how Garin had fought back from two sets to love to defeat fellow Australian Alex de Minaur over more than four and a half hours in the fourth round.

“Good job,” he clapped mockingly another time after a double fault.

It was a straight-sets victory but world No.40 Kyrgios said the threat from the Chilean soon became apparent.

“We know how capable he is on the other surfaces. But, my God, that forehand return is going to give me nightmares,” Kyrgios said.

“I came out first game and he hit, like, three winners off my serve.

Commenting at length about his personal pride in finally reaching a semi, Kyrgios said even quite recently he was weighing up what to do with tennis before “some things just changed in my life”.

“At the start of the year, I didn’t even know if I wanted to really play like a proper schedule at all,” he] said.

“I obviously had thoughts the last year, year and a half, whether I wanted to play anymore – lost the love, lost the fire, lost the spark.

“Then some things just changed in my life.

“I kind of just rediscovered that I’ve got a lot of people that want me to play, that I play for.”

It’s been in the same time frame that Kyrgios has felt comfortable discussing his mental health challenges.

“I posted this year about the kind of mental state I was in in 2019 when I was at the Australian Open with self-harm and suicidal thoughts,” Kyrgios said.

“I’m sitting there today after the match … [thinking what it’s like] to be a semifinalist at Wimbledon, it’s a special accomplishment for everyone, but I think especially for me.

“I almost started doubting myself with all that traffic coming in and out of my mind.

“I just sat there today and soaked it all in. There’s just so many people I want to thank.

“At the same time I feel like I don’t want to stop here either.”

Konta coasts into third round at Eastbourne with straight-sets win 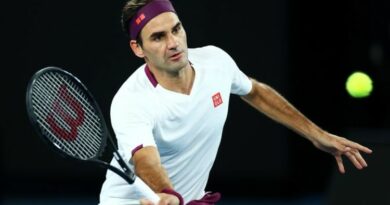