Long before winning the Australian Open in 2018, Caroline Wozniacki made a different and quirkier impression at Melbourne Park.

Before anyone could ask a question at the obligatory media conference after a routine third-round win in 2011, Wozniacki noted that she was called boring because she always gave the same answers and said it was because she always got the same questions. "I know what you're going to ask me already," she said, "so I'm just going to start." 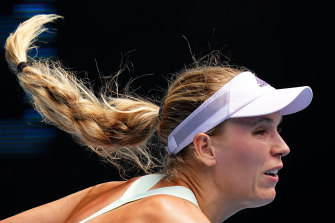 Caroline Wozniacki during her win at the Australian Open on Wednesday.Credit:AAP

Then followed a two-minute monologue in which said she had played well, was happy to get through against a tough opponent, felt comfortable with her new racquet, but did not know who she played in the next round. These were straight lines whose effect was parody.

Wozniacki was 20, already No. 1 in the world, but without a major to her name, an inconsistency that arose at every media conference. "Do I deserve to be
No. 1?" she asked herself. "I'm just happy to be here."

She then called for more original questions. If asked only about tennis, she said, "I can't really say I like eating bananas."

Tickled, media obliged. Wozniacki talked about cricket – she had just met Aaron Finch and Peter Siddle – and about her hope for her beloved and beleaguered Liverpool now that Kenny Dalglish had been appointed manager.

She talked about global warming. "We shouldn't be flying so much," she said. "It doesn't really help." Make cars electric, boost public transport, go green. "When you take a shower, don't stay there for half an hour," she said. "Two minutes is enough, even for girls."

Marriage and children? "First I need to find a guy," she said. She prized "honesty, understanding what I'm doing, maybe a sportsperson himself". She would date Rory McIlroy and is now married to retired basketballer David Lee.

Later that year, Wozniacki bobbed up in a Novak Djokovic media conference at Wimbledon, representing the fictitious Monaco News, asking him about his losing streak. It was one. Amused, Djokovic said he would try to emulate the
No. 1 women's player. Did she know her?

Even then, Wozniacki loved the athletic challenge of tennis, less so its navel-gazing earnestness. Over an estimable and high-profile career, rarely straying outside the top 10, she has mostly conformed, but now at 29 is escaping. In the other world, different questions await.

But not just yet. On Wednesday at Margaret Court Arena, she came from two breaks down in both sets to withstand impetuous Ukrainian teenager Dayana Yastremska 7-5, 7-5. It was a match that might be called vintage Wozniacki,  in her time the game's consummate defender.

Early doors, Yastremska blasted Wozniacki off the court. "I was just thinking to myself, it surely can't continue," Wozniacki said. At 1-5, she was hoping only to eke out another 30 minutes in her career.

But she scrambled, because that's what she does. Slowly, she connected shots to make rallies, rallies to make points, points to make games. Fourteen points in a row became six games in a row to win the set. Yastremska's wildness helped. At match's end, the unforced error count would read 15-47.

Scrambling alone is not quite enough, which perhaps explains why Melbourne 2018 will remain Wozniacki's only major. But it has gained her universal admiration, and a decent living, and now a lap of honour of Melbourne Park.

Down 0-3 in the second set, she had to scramble again, and did. But as she scrambled to stay in points, Yastremska found herself scrambling to stay in the match. After a medical time-out, she emerged with a bandaged thigh. "I don't think there was anything wrong," said Wozniacki. "She was running just fine. It's a trick she's done before, and I knew it was coming." Evidently, the time for diplomacy had passed.

If it was a tactical distraction, it failed for Yastremska. Match done, she stalked away, still with a ball tucked into her skirt. Plainly, at 19, she has much more tennis to play. Wozniacki doesn't, but hopes for at least two more matches.  In the fourth round, she would possibly meet Serena Williams, a genuine friend. Now that would be an encore.

Wozniacki no longer feels a need to liven up her own media briefings. The years have tamed her as they do to most between 20 and 29. We ask, she answers, orthodoxy prevails, life goes on. She was happy to hang in and then beat a tough opponent, glad of the crowd's support, warmed to hear Neil Diamond's Sweet Caroline over the PA yet again, etc. Boring? Maybe. Content? Yes.

Finch and Siddle are still in the news. Dalglish did not last, but Liverpool's fortunes have turned, and how. Climate change is more topical than ever, literally the burning issue. The marriage question is settled, the children question still open.