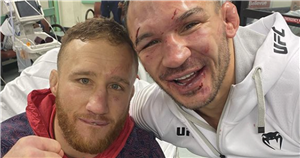 Michael Chandler and Justin Gaethje were able to pose together following their brutal clash at UFC 268 – albeit from a hospital ward.

It was Gaethje who took a decision win against his fellow American Chandler, following a titanic bout which arguably overshadowed the main event between Kamaru Usman and Colby Covington.

The two lightweights went toe-to-toe during their five-round war at Madison Square Garden, which comfortably earned the Fight of the Night accolade and is now surely a contender for the UFC Fight of the Year.

All three judges favoured Gaethje, with the scores reading 29–28, 29–28, and 30–27, but despite sustaining clear damage both fighters initially refused medical treatment, and declined to leave the octagon on the stretcher or crutches on offer.

However, Chandler was soon whisked into an ambulance backstage and Gaethje, who like his rival skipped the post-fight media duties, was seen asking after the condition of his opponent backstage.

'The Highlight' was able to catch up with Chandler, 35, at a nearby hospital though where both were sent for treatment, and having embraced in the octagon earlier in the evening, were respectful to each other again as they posed for a picture to assure fans they were ok.

It was of no surprise that both were in bad shape afterwards with Gaethje, who went the distance for the first time in his career, rocking the 'Iron' with a vicious uppercut in the third round, and also landed further damaging blows.

For his part Chandler, 35, landed a series of powerful leg kicks and the pair undoubtedly earned their $50,000 bonuses for producing the best bout of the show.

Was Gaethje vs Chandler the UFC fight of the year? Let us know in the comments section below.

In his post-fight interview Gaethje, who in October 2020 fell short in his world title bout with Khabib Nurmagomedov, touted himself for another shot at the belt.

“I knew exactly what that motherf***** was, he was a warrior,” Gaethje said after the win. “We are living in the wrong times.

"Me and him should have been fighting to the death in the f****** Coliseum. Hopefully it’s [Charles] Oliveira down in Brazil or Poirier in Louisiana, I don’t give a f***, I’m ranked No.2.

In the main event, Kamaru Usman retained his UFC welterweight title with a decision win over Colby Covington. 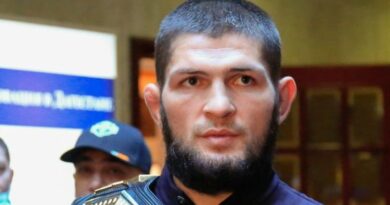