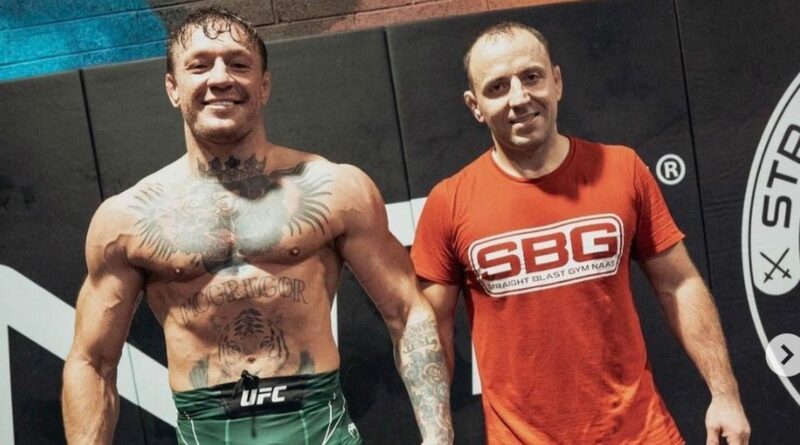 Conor McGregor's heavyweight bulk shows no signs of slowing down as he's been pictured looking huge in training.

McGregor has been piling on the pounds in recent months – recently claiming he now weighs more than Tyson Fury and earning himself comparisons to WWE legend Brock Lesnar.

His coach John Kavanagh put the bulk down to intense weight training which replaced his usual MMA drills in the wake of his severe leg break against Dustin Poirier in July 2021, his last UFC fight which ended in defeat.

But the Notorious is now back into the swing of things and looking bigger than ever in photos shared to Instagram by wrestling coach Sergey Pikulskiy. Not only do his arms look twice the size, but his quads are also massive compared to what we're used to seeing.

Rather than focus on his physique, Kavanagh chose to instead tease McGregor about his freshly-shaven face which has caused quite the stir with his fans, joking in the comments: "Who's the youngfella?"

Who do you want to see McGregor face? Let us know in the comments section below

When asked about how much weight he'd gained by a fan last week, McGregor replied: "I don't know mate but I am big. I'd say about 265lb in the bank."

That would put him above heavyweight boxing champion Fury, who weighed in at 264.8lb for his last fight against Dillian Whyte. McGregor is working towards his long-awaited return to the Octagon at 170lbs.

However, he hasn't been enrolled with the United States Anti-Doping Agency (USADA), a mandatory requirement for UFC competitors. That means his next fight won't be until April at the earliest, with six months of testing required.