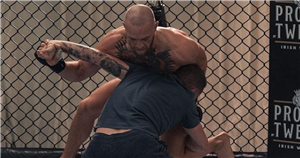 Conor McGregor has promised to deliver a “masterpiece” when he takes on Dustin Poirier later this month.

McGregor returns to the UFC for his first fight in a year as he takes on Poirier on Fight Island on January 23.

The Notorious has not fought since stopping Donald Cerrone last January thouhg is determined to silence his doubters this time around.

He has posted plenty of photos of training to social media and appears to be in tip-top condition ahead of the bout.

And McGregor noted his intentions on Twitter, simply writing: “I promise a masterpiece.”

McGregor and Poirier have met before with the Irishman winning their 2014 bout in the first round.

McGregor's record currently stands at 22-4 while Poirier has won 26 of his 33 MMA bouts.

Poirier’s long-time training partner Mike Brown said: “When they fought the first time there were a lot of questions about Conor.

“At that point in his career, that was his biggest win, his biggest test was Dustin. And he did well – he fought a good fight and landed a good shot.

“But so much has happened since, we got to learn so much about Conor. Both guys have been tested in many ways and have shown a lot of different things – strength and weaknesses since then.

“Now it’s time to train, prepare, and see what we can come up with.

“A lot has changed. I think he [Poirier] is a lot more durable at 155, killing yourself to make the weight is never the answer and I think that’s shown.

“And he’s improved in many places, but there’s only one way to find out and one way to show, and that’s putting him in there and seeing what happens.”