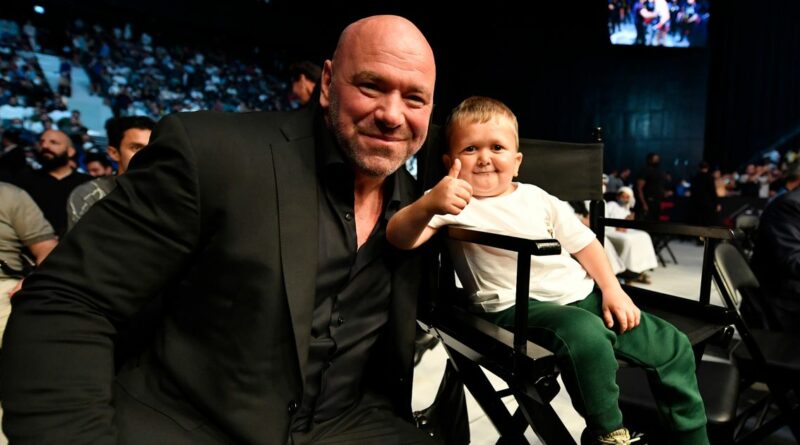 Dana White fears there will be one thing stopping Hasbulla Magomedov from competing in the UFC – his dad.

Russian social media star Hasbulla, 19, suffers from growth hormone deficiency, but that hasn't stopped the 'Mini Khabib' from being touted to take part in a bout with the MMA's top promotion though.

And he was at UFC 267 last month in support of fellow Russian Islam Makhachev – who beat Dan Hooker on the main card.

Whilst in Abu Dhabi, he met with UFC president White and also went viral on Twitter when he landed a sneaky punch on former two-division champion Daniel Cormier, who had gone over to talk to him between fights.

However, it was a confrontation with rival Abdu Rozik, who suffers with the same condition, that sparked rumours that Hasbulla would soon be getting in the octagon.

Rozik, an artist from Tajikistan, has become renowned for his world-famous singing talents and when the two met they soon became embroiled in a volatile confrontation that required security staff to pull them away from each other.

Following the unsavoury exchange, talk has been rife that Hasbulla and Rozik, 18, will settle their differences within UFC but White is aware of one major obstacle.

“I don’t know if he wants to get involved," he told Pardon My Take.

“From what I hear, his father is super protective of him. If that’s the case, you don’t want your kid fighting.”

Would you like to see Hasbulla in a UFC bout? Let us know in the comments section.

Just a week beforehand however, White, 52, had seemed far more optimistic about the prospect of Hasbulla being in a potential bout.

“I love the kid," he told Barstool Sports.

“Is there more than a zero per cent chance (of him fighting in UFC)? Yes.”

White has previously voiced his disdain for what he considers "freak show" fights, but the teenage blogger's popularity appears to have altered his way of thinking.

Asxab Tamaev, a Russian MMA fighter, is the man that started the Hasbulla vs Abdu Rozik rumours when he uploaded a 'press conference' in which the pair traded insults earlier this year.

But he has come under stinging criticism from human rights groups, with the head of the Russian Dwarf Athletic Association Uliana Podpalnaya saying that it is "a show to make people laugh".

McGregor vs Cerrone: Dana White announces plan for Conor McGregor should he win at UFC 246