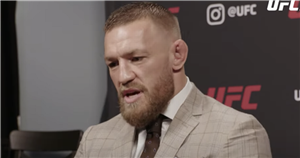 Conor McGregor has blasted Dustin Poirier months after the Diamond called him over a charity donation he failed to make to Poirier’s Good Fight Foundation.

Following their bout at UFC 257 earlier this year, McGregor was expected to donate $500,000 to Poirier’s charity which helps underprivileged families in the American’s home state of Louisiana.

However, weeks after the bout McGregor still hadn’t followed through on his promise, which led Poirier to respond to the Irishman on Twitter and call him out.

“That’s a fun prediction! You also predicted a donation to my foundation and you and your team stopped responding after the fight in January," Poirier stated.

McGregor replied to Poirier at the time, claiming the Diamond had never shared what he planned to do with the donation.

“We’ve been awaiting the plans for the money that never came. I do with all my donations. Know where it’s going dot for dot. Otherwise it goes walking. As is the case with a lot of these foundations, sadly.”

Now, several months on from the debacle, McGregor has lifted the lid on what really went on between the pair in a recent interview with BT Sport’s Ariel Helwani.

“I was frustrated about that. But, you know, I picked Dustin. I felt a bit sorry for him, he was a southpaw boxer and that was that. That’s the way it went.

Do you think Conor McGregor will defeat Dustin Poirier at UFC 264 this weekend? Let us know in the comments section below.

“But some of the shady stuff that have gone on in regards to some of the other issues. I’m like ‘you’re going to pay for that now.’ That’s just the way it has to be.

“He jumped the gun, that’s what he done. I went with a reputable charity in the area. I had said I was going to donate. Like I said, it originally started as a charity event.

“It was going to be a charity event and the profits off of the event were gonna go to charity.

“When the fight actually got announced when we made it under the UFC banner, I kept it up. I said, ‘I’ll still help you out, I’ll still give you the dig out.’

“Then, you know, it is what it is. I’m happy where [the money’s] gone. It’s gone to the boys and girls club of academia and not just some random MMA gym for profit which is essentially what the attempt was.

“I’m happy the way it’s gone, and it’s got me into that other mode. It suits me down to the ground. I’m happy with it.

Conor McGregor is set to meet Dustin Poirier in a trilogy bout at UFC 264 this weekend, just six months after the Irishman was defeated by the Diamond at UFC 257 via second-round knockout.

A winner of the rubber match is almost guaranteed a title shot in the UFC’s lightweight division.