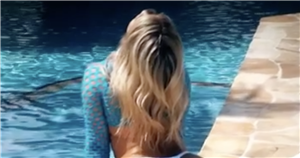 Ex-UFC star Paige VanZant has teased fans by performing the splits in a thong to promote her new website.

The American, who gained huge popularity on social media for her naked snaps during lockdown, launched her own website after losing her bare-knuckle boxing debut.

Responding to calls for her to join OnlyFans by setting PaigeFanZant.com, it has seen the 27-year-old promote the site with sexy snaps and videos.

And her latest video leaves little to the imagination, posing for the camera in skimpy bikinis.

VanZant shared a compilation to her 2.8m Instagram followers on Friday, giving them a look behind the scenes for the production of the content on her paywall-protected website.

While the former UFC star even shows off clips where she is completely topless in a jacuzzi and a swimming pool.

But the most memorable moment is VanZant performing the splits next to the water.

Performing a stretch, the American puts her incredible future on show while showing off her flexibility.

Accompanying the clip, the 27-year-old said: “Thank you all so much for you support on my fan site. I am having so much fun chatting with you all and sharing sexy content with my sexy fans.

“I won’t go into detail what all goes on but if your curious, click that link in my bio and find out for yourself.”

After winning five fights and losing three of them, a confrontation came with the MMA president after her loss to Amanda Ribas.

Leaving for BKFC a month later, the 27-year-old found herself flooded with requests to join fan subscription channel OnlyFans.

After losing her bare knuckle debut in February to Britain Hart, the announcement came on her Instagram story with a naked snap of the new website.

READ MORE:Paige VanZant covers herself in whipped cream as she admits she never wears clothes at home