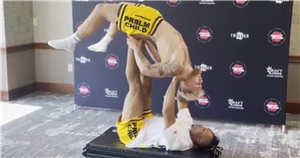 Jake Paul fans were left baffled after watching the boxer's unusual training workout ahead of his fight with Ben Askren on Saturday.

Paul posted a live stream of his preparations to his 14.8million Instagram followers, but the workout appeared far from conventional.

The YouTuber adopted a number of strange positions during the stream, with one clip showing him balancing on top of his partner's outstretched feet.

Another saw his body bent into 'L' shape while facing his partner's stomach, while a third video appeared to show him being bounced up and down on the sole's of his unnamed helper's feet.

Fans were baffled by the video and took to social media to question exactly what the 24-year-old star was up to.

One joked: "What in the cirque du soleil is this?", while someone else added: "It appears Jake has already mastered the reverse floating guard. Ben is done".

A third person also made light of the video and said: "Jake Paul practicing the coveted “Airplane weeee” technique ahead of his bout with Ben Askren".

Paul and Askren are due to meet at the Mercedes-Benz Arena in Atlanta on Saturday night, with the YouTube star a narrow favourite to prevail in the eight-round bout.

Askren, a former Bellator champion, admitted in an interview with the Metro that he doesn't know what to expect from Paul when the pair finally meet.

He said: "We haven’t seen anything. The level of his competition was so low that it was almost impossible to tell if he is actually good at this.

"If there is one thing people respect about all fighters it’s the toughness to deal with adversity in battle and we have not seen that out of him. I don’t think he was hit hard by either one of those guys.

"They were so incredibly terrible at boxing. So we haven’t seen anything out of him yet".

READ MORE: Conor McGregor tells son, 3, to 'punch' another kid in the mouth during pep talk