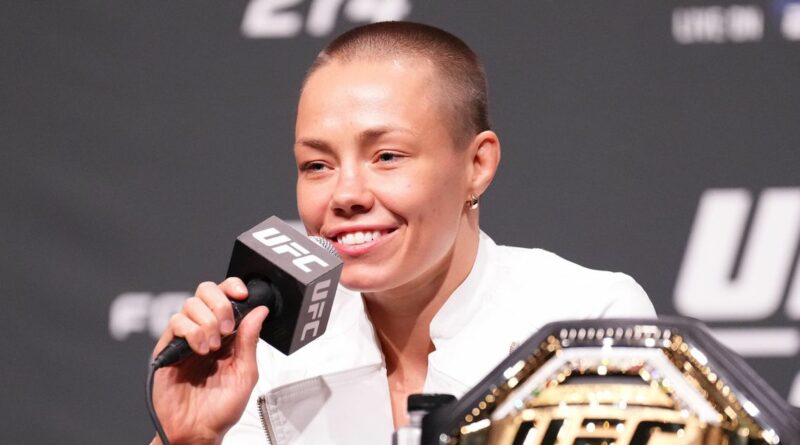 Mixed martial arts is considered by many to the world's purest sport, a craft celebrating athleticism and expression in which every part of the anatomy plays a key role.

Such a demanding vocation naturally tends to produce an assortment of attractive people, many of whom compete in the Ultimate Fighting Championship. MMA stars tend not to wear many layers at the best of time, but a number of well-known UFC faces have done away with clothes altogether to go nude on camera.

UFC women's strawweight champion Rose Namajunas will put her belt on the line against Carla Esparza at UFC 274 on Saturday night. The fan favourite is among those to have bared all as nature intended, but she's hardly alone in the birthday suit club.

Two-time strawweight champion Namajunas made an unsuccessful UFC debut against Esparza back in December 2014 in a battle to be crowned the division's inaugural champion. 'Thug Rose' came off second best on that occasion, though there's no doubt as to who has the momentum this time around.

Namajunas has gone 9-2 in MMA's top promotion since that sluggish start, shedding her brunette locks to instead embrace a much shorter trim. Performances have improved in kind, and the 29-year-old has enjoyed famous wars against the likes of Joanna Jedrzejczyk and Zhang Weili, beating each in back-to-back fights.

The Wisconsin native posed naked for Women’s Health and said at the time: “My naked body is. . .the story of my whole life. There's a lot around us that we can't control, but my body, my mind, and my soul are pretty much the only things that I can. All the scars on my body, all the bumps and bruises, all the muscles — that is a story of everything I have done. And it's not just my story. My ancestors who came before me gave me this vessel to sculpt and mould.”

One of the first mixed martial artists to take the plunge by posing for ESPN's 'Body Issue', Michelle Waterson's may well have a side career to fall back on in modelling. At 36, 'The Karate Hottie' is ebbing towards the end of her UFC days and has already began to move into the media side of things.

The karate black belt is among Namajunas' UFC victims after falling to the strawweight queen in 2017. Waterson's appearance on the ESPN magazine cover was a special victory as she battled to overcome the image concerns related to her post-birth body.

"I've finally come to a place in my heart and my soul that has embraced my body and the things that it does for me – and the way that it makes me feel," she told ESPN. "I'm really at peace with who I am. That peace came after I had my daughter. I really gained an appreciation for the work that I put in to get my body where it needed to be."

More than a decade has passed since Jon Jones' rear decorated the Body Issue front cover in 2011. He followed the 'old school' UFC ranks of Randy Couture, Gina Carano and Cris Cyborg by baring (almost) all to the world.

'Bones' is considered by many to be the best to have ever stepped inside the Octagon, though a rap sheet of misdemeanours outside the cage have spoiled his legacy. This includes being stripped of the light heavyweight championship on two occasions after testing positive for banned substances, not to mention his alleged involvement in a 2015 hit-and-run that left a pregnant woman injured at the scene.

The 26-1-1(NC) combatant hasn't fought since February 2020 amid talk he's ready to move up to the heavyweight division. Jones has been accused of delaying his transition until Francis Ngannou is no longer champion but has proved he has nothing to hide in regards to his anatomy.

There was a time in her UFC cycle when former bantamweight champion Ronda Rousey once resembled an unstoppable force. A bronze medal-winner in judo at the 2008 Beijing Olympics, 'Rowdy' possessed an armbar that, for a time, stumped just about anyone who crossed her path.

It was during her time in the sun that Rousey also exposed her athletic frame in the cold light of day. As well as taking her turn on ESPN's Body Issue in 2012, the submission specialist also took part in a more sultry shoot for Maxim.

Following a pair of devastating knockout defeats, Rousey took her leave of the UFC and now appears on WWE. She's also entered the world of cinema and appeared in films like 'The Expendables 3', 'Entourage' and 'Furious 7', albeit with clothes encouraged.

The final person to face Rousey in the Octagon just so happened to have her own month on the cover of ESPN. Amanda Nunes was already well-established as bantamweight champion when she fronted the magazine's Body Issue in September 2019.

However, 'The Lioness' had also become the first woman in the UFC to simultaneously hold belts in different weight classes after she took the featherweight crown off Cyborg the previous year. Nunes has since lost her belt at 135 pounds to Julianna Pena, though there's plenty of room to argue her as the best female fighter of all time nonetheless.

A ratio of 13 knockout wins from only 26 professional fights is particular proof as to just how dangerous Nunes is, failing to finish only four of her 14 wins in the UFC.

UFC 251 prize money: How much will Usman, Masvidal, Volkanovski and co earn?