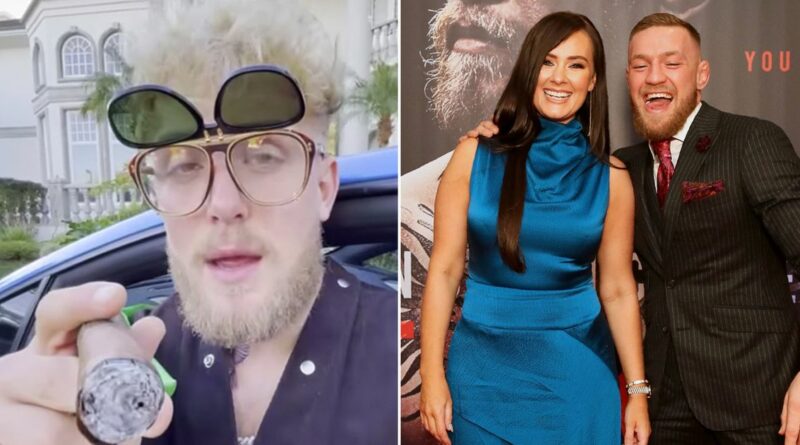 They might share a love of making money and upsetting the established order of things, but there's no love lost between Jake Paul and Conor McGregor.

Indeed, the thing Paul loves most about McGregor is winding him up.

Take this week, for instance. Paul, the YouTuber-turned-boxer who extended his professional record to 5-0 with a second defeat of Tyron Woodley last Saturday, goaded McGregor in his latest attempt to lure him into a fight.

"I just knocked out a five-time UFC champion and embarrassed your whole company," Paul replied when asked what his message for UFC president Dana White was.

Unsurprisingly, it's not the first time Paul has unsuccessfully called out The Notorious. The two fighters have been exchanging words – and insults – for well over a year now.

Their cold war began 12 months ago when the American joked about McGregor's wife and alleged his team had sent the Irishman a substantial offer for a fight between the pair.

Who would win in a fight between Jake Paul and Conor McGregor? Let us know in the comments section.

"What the f*** is up, you Irish c***,” he began. "Good morning, Conor McGregor. I know you’re probably beating up old dudes in a bar right now, or maybe you’re jacking off because you’re sick of f***ing your wife. I mean, she’s a four, Conor. You could do a lot better. But happy Monday.

"My team sent you a $50 million offer this morning – $50 million contract [with] proof of funds – the biggest offer you’ve ever been offered, but you’re still scared to fight me, Conor.

"You’re ducking me because you don’t want to lose to a f***ing YouTuber. You’re 0-1 as a boxer. I’m 2-0 as a boxer," he added, musing about McGregor’s only professional boxing match, a defeat to Floyd Mayweather.

Less than one month later, as McGregor faced Dustin Poirier for a second time, Paul hired a plane to fly a banner that read: "Conor McGregor is scared of Jake Paul."

After the Irishman was knocked out by Poirier at UFC 257, Paul went to extreme lengths to mock his rival, getting a $100,000 chain made depicting the moment he lost the fight.

Not content with merely commemorating the moment as a piece of jewellery, Paul even went to the trouble of sending his work to Poirier, who happily accepted the gift.

He then reflected on the insults he had sent to McGregor the month before, particularly those about his wife, Dee Devlin, whom he compared to a four-year-old.

Paul said: "McGregor's done it. McGregor has attacked Khabib's wife, Khabib's religion, thrown chairs at people. Like, this is the fight business. If people are gonna get offended, then get the f*** over and choose a different sport. Go do gymnastics."

Just over a week after the social media star defeated Ben Askren in his third professional fight, McGregor hit back with a veiled barb of his own, writing on Twitter: "UFC high level fighting > Blogger jackass boxing."

He also labelled Paul "embarrassing" on Instagram after the former Disney star stole Floyd Mayweather's hat at a press conference for his brother Logan Paul's fight with the boxing legend.

When Paul defeated Woodley for the first time in August, McGregor was clearly not impressed and tweeted: "Salivating," suggesting that he believed the American to be an easy win should the pair ever meet.

"We’re on the path to [much] bigger fights," Paul replied when asked for his response to the tweet after the fight. "I’m ‘salivating’ too, because I’m just getting warmed up.

"Conor McGregor has a lot more to focus on besides me right now. I’ve got five wins in a row, he’s 1-3 in the last four years," he said, aiming another dig at McGregor's consecutive losses to Poirier.

Much of Paul's own trash-talking style appears straight out of the McGregor playbook, but the man himself says The Notorious looks dumb firing off insults while he struggles in the octagon.

"Look, he’s this guy that was the s*** for so long and the centre of attention, and now his career has plummeted,” Paul said in August.

"He’s falling off. He’s 1-3 in five years and it seems as if people don’t really care. He’s disrespectful. Even to the point where it’s too far.

In November, Paul laid the gauntlet down to McGregor once again. He said of a potential showdown with The Notorious: "It’s very real, I think that fight happens in the next 36/48 months for sure.

"It makes financial sense. I don’t have a message for Conor. At this point, he needs me more than I need him.

Despite constant talk from the Paul camp of a fight between the pair, McGregor's coach John Kavanagh appeared to cast doubt on a blockbuster clash earlier this week.

"But as for Conor vs Jake, I've honestly never once heard that, and I've heard some very crazy things, but that's never been suggested," he told reporters.