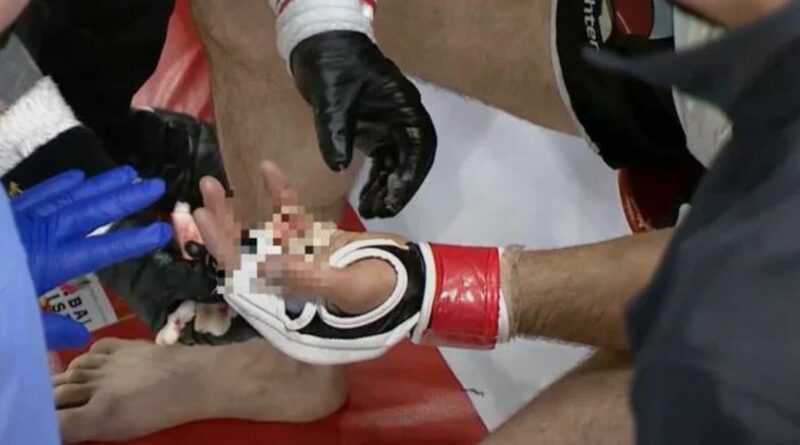 The ring finger of Canadian MMA brawler Khetag Pliev was ripped clean off his hand during his Cage Fury Fighting Championships 94 bout against Devin Goodale on Thursday evening.

The bout, which was aired on UFC Fight Pass, was called to a halt by the referee after the second round had come to a close before a search for the missing digit was shared over the PA system.

CM Punk said on the live broadcast: “It wasn’t a compound fracture, a break, it wasn’t a dislocation, a break, a laceration. His finger was just gone. It’s gone.”

Luckily for the former Olympic wrestler, his finger had been lodged inside his glove the entire time – and was swiftly reattached by surgeons at a local hospital to the Philadelphia arena.

Pliev told ESPN that a doctor said he had torn 50% of all the tendons in the finger, and that he will need another procedure down the line after the initial reattachment.

Promoter Rob Haydak said that he was told by Pliev that the finger had been dislocated in the first round, and completely came off in the second before the TKO stoppage.

“I got hit by something apparently — I don’t remember what happened.”

"In the second round, he caught my glove with one hand and held it," Pliev said.

“When the second round was finished, I see my [bone] was out in the open. I wanted to keep fighting, because I felt like I had this guy. But the doctor saw that and stopped the fight." Haydak said: “It was crazy. He didn't even flinch. He was getting ready to do the [official] decision and I was like, 'Uh, guys, get him out of the cage and go put his finger back on.'"

Russian born Pliev, 37, completed in the London 2012 Olympics in wrestling for Canada, and now has an MMA record of 5-2 following the 180-pound catchweight fight defeat.