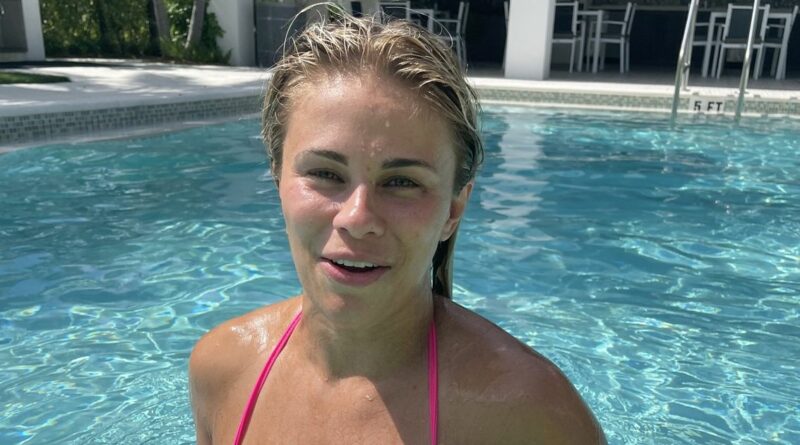 VanZant has been hard at work as she targets another win over Ostovich two years on from their first meeting, but the 27-year-old still has the freedom to entertain fans in her spare time.

The MMA beauty has made the most of her huge following since leaving the UFC in 2020, stepping up her content across social media channels in between fights.

And VanZant once again set pulses racing with her latest upload, teasing a scantily clad slip in the swimming pool with a link to her subscription-only website:

The Oregon native reeled in her almost 350,000 Twitter followers with a caption that read: “Almost had a wardrobe malfunction! Or maybe I did!”

VanZant has a little less than two months to go before she faces Ostovich for a second time, having submitted her Hawaiian opponent with a second-round armbar in their January 2020 clash.

Ostovich will be making her bare knuckle boxing debut at BKFC 19, having been released by the UFC in December following a streak of three successive defeats.

Do you think Paige VanZant will beat Rachael Ostovich in their bare knuckle reunion? Let us know in the comments section.

Both combatants have done their bit to promote their BKFC bout. VanZant sent a picture of the fight poster to her 2.8million Instagram followers along with the caption: “Come for the boobies, stay for the violence.”

It was reported that VanZant signed a ‘multi-million dollar’ deal to join the BKFC, where she suffered a decision defeat to Britain Hart in her February debut.

VanZant detailed in August 2019—prior to her last fight in the UFC—that she earned more from her social media posts than she did fighting for the promotion: "I make way more money sitting at home, posting pictures on Instagram, than I do fighting.

"When I did my contract negotiation the last time, the talk was, 'I can’t pay you more than a female champion.’

"Okay, but why are comparing me to just women? All of us should be getting paid more in general.

“I want a significant pay raise, to be completely honest. I’ve just been extremely accomplished outside of the UFC, as well as inside of the UFC.

"Five wins in the UFC, four finishes, I’ve been main event twice, and I think someone with those accolades should be paid more.”

It was recently confirmed VanZant will also serve as a commentator on June 18 for the inaugural event of Gamebred FC, a new bare knuckle promotion created by UFC star Jorge Masvidal.

Between those media duties and her social media escapades, VanZant’s fans will hope she’s adequately prepared to face Ostovich as she seeks her maiden BKFC victory in July.

Conor McGregor vs Terence Crawford in the UFC? Bud gives his verdict on Octagon showdown