Paige VanZant has been wowing fans on social media for some time, with plenty of highlights on offer.

The 27-year-old, who is currently signed to All Elite Wrestling and BKFC after a stint in UFC, burst to fame thanks to her risqué social media posts. She has always been in phenomenal shape due to her careers in combat sport and sports entertainment.

She has set pulses racing with a number of stunning posts on Instagram, showing off her figure in bikinis and various costumes to her 3.2 million followers. Each of her posts online tend to get between 30,000 and over 100,000 likes on Instagram.

VanZant made her official in-ring debut for AEW at their Double or Nothing pay-per-view in a six-person match on Sunday. Along with the ‘Men of the Year’ Ethan Page and Scorpio Sky, VanZant faced Frankie Kazarian, Sammy Guevara and Tay Conti.

Conti has been presented as VanZant’s main rival on AEW’s weekly show Dynamite. The former UFC star helped her trio secure the win as Scorpio Sky got the pinfall on Kazarian, and she was thrilled after the bell.

“I showed everybody, meant to be a pro wrestler too. I knew this was the only place I wanted to make my AEW debut. It had to be big, and it had to be on pay-per-view.

VanZant, who is a popular OnlyFans model, regularly shows off her curves and posterior on social media while also training and excelling in the ring or octagon. The American will likely now turn her attentions to training ahead of her bare-knuckle return bout on June 16 at Alexandra Palace in London. Despite going 0-2 in her first pair of fights at the BKFC promotion since signing in August 2020, VanZant will be competing in the main event of this night in London. The flyweight left UFC after losing three of her last four bouts, and she debuted with the bare-knuckle league in February 2021.

Even though things have not gone to plan, she is remaining positive. VanZant admitted she was aware of the negative press she received after signing with BKFC, but claimed she has had fun while competing.

“I’m not done yet,” Van Zant told MMA Fighting. “I know people saw me going into it as a terrible career move and there was all the negativity and the shock of me signing with bare-knuckle boxing. Are you a fan or follower of Paige VanZant? Let us know in the comments section.


“Yeah, I did go 0-2. I need to come out there, I need to get some wins under my belt. Those losses even though losing is terrible, I just had so much fun.”

VanZant lost her first fight to Britain Hart via unanimous decision, and returned a few months later to rematch Rachael Ostovich, losing once again via decision. She will look to make amends in the London main event next month. 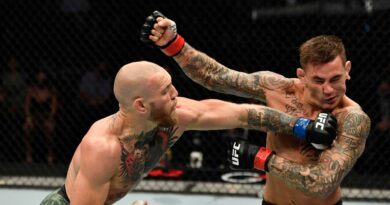