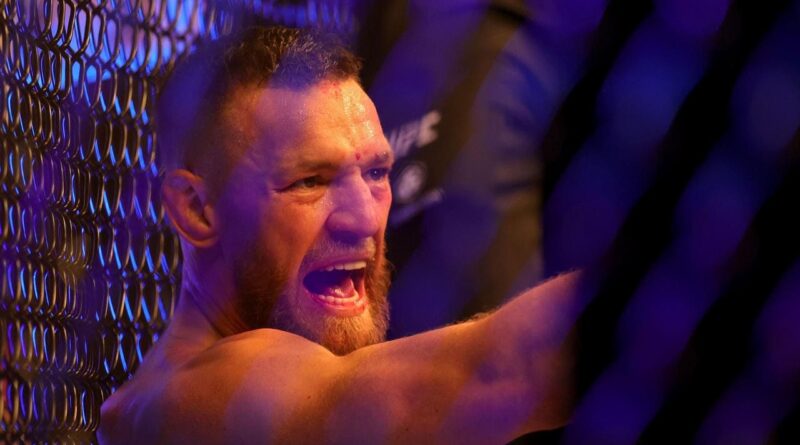 Conor McGregor’s complete heel turn against Dustin Poirier before and after the UFC 264 fight has truly shown there is no love lost between the pair.

With the UFC world assuming that there will be a fourth fight between the pair after McGregor broke his tibia in the second round, McGregor continued to run his mouth.

Before the fight, McGregor had accused Jolie Poirier, Dustin’s wife, of sliding into his DMs on Instagram as he gave interviews and press conferences that looked like the old trash talking Conor was back.

But post-fight in the octagon, Poirier said McGregor took the trash talk too far.

“And this guy was saying he was gonna murder me and all kinds of stuff. He was telling me he was gonna kill me tomorrow. I’m gonna leave here in a coffin. You don’t talk like that to people, man.

“I hope this guy gets home safe to his beautiful family.”

McGregor left the fight on a stretcher.Source:AFP

The same could not be said for McGregor, who fired a bitter shot at Poirier when speaking with Joe Rogan.

“I was boxing the bleeding head off him,” McGregor fired. “Kicking the legs off him. This is not over.”

Then, this to Poirier and his wife Jolie: “Your wife is in my DMs. Hey baby, hit me back and we will chat later on. You little ho.”

Jolie was pictured flipping McGregor off as she stood in the octagon post-fight.

Talk about ride or die. #UFC264pic.twitter.com/53AP3nQkuI

But a video revealed what McGregor said on the edge of the octagon as the doctors attended him.

Speaking to BT, Poirier couldn’t believe what he was saying.

“He was sitting there on the mat with a broken leg pointing like this (gun to his head) telling me he was going to kill me still,” Poirier said. “Like what are you doing bro? That’s disgusting man. I’ll break his other leg.”

But McGregor, who posted a video to say his surgery went well and he would be back at work after six weeks on crutches, may have revealed more of what was actually going on in a quote retweet from former women’s champion Ronda Rousey.

Rousey may have just put the whole issue in context that the most marketable star in UFC history was just selling his next fight, which may be the fourth fight with Poirier.

@TheNotoriousMMA — I def wouldn’t have had the mind to do that. The other fighters,

@ufc and media are lucky to have you.”

It’s a claim McGregor did little to dispel by thanking Rousey for.

Thank you for the message Ronda!
I appreciate it greatly ❤️ https://t.co/850LvnJFPn

As it stands, Poirier will now fight for the lightweight title held by Charles Oliveira.

But McGregor and Poirier’s rivalry appears far from over with UFC president Dana White hinting that there would be a fourth time around for the pair.

“The fight didn’t get finished. You can’t have a fight finish that way,” White said.