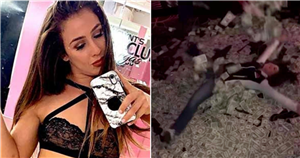 A new UFC star has taken delight in the fact she's now bathing in dollar bills – as opposed to dancing for them.

Back in December, Crystal 'Vanessa' Demopoulos quit her job as a stripper to concentrate full-time on her MMA career. Just eight weeks later, she landed her first win inside the octagon as she forced Silvana Gomez Juarez into submission.

She's now preparing for another strawweight fight at UFC on ESPN 38 on June 25, when she takes on Jinh Yu Frey in Las Vegas. The bout is on the undercard of the Arman Tsarukyan v Mateusz Gamrot main event.

Demopoulos, 33, had nine pro-MMA fights before making her UFC debut last August, where she was beaten by JJ Aldrich. And now the 'Lil Monster' has taken to Instagram to laud her new found financial gain.

She uploaded a video clip of her bathing in dollar notes, and wrote: "FIRST time in my life I don’t have to dance for my dollars. Instead I get to fight for them now.

And she asked fans not to be judgemental about her previous career: "Never compromised my morals or my dreams. This was every every night! Buckets of money and Champaign Showers," she added.

Can Demopoulos one day bathe in a UFC belt? Let us know in the comments section.

"Decided to marry the fight game instead. Don’t judge people on their path. We all have our journey." After her previous win over Gomez Juarez, which took her pro-record to 7-4, she spoke openly about giving up her career in the entertainment industry.

"I don’t think it’s a secret, I was an exotic entertainer for 13 years," she admitted. And I didn’t actually say it on the mic, but I’d like to say it right now: I walked away from being a stripper to continue this camp.

“I quit dancing about six to eight weeks ago just so I could focus full-time on MMA, take this extremely seriously in the gym every single day." She also joked her stripper experience helps when it comes to certain Jiu-Jitsu moves. 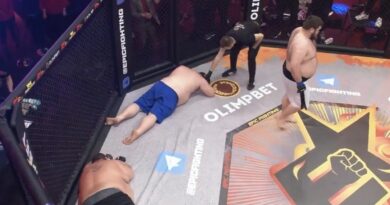