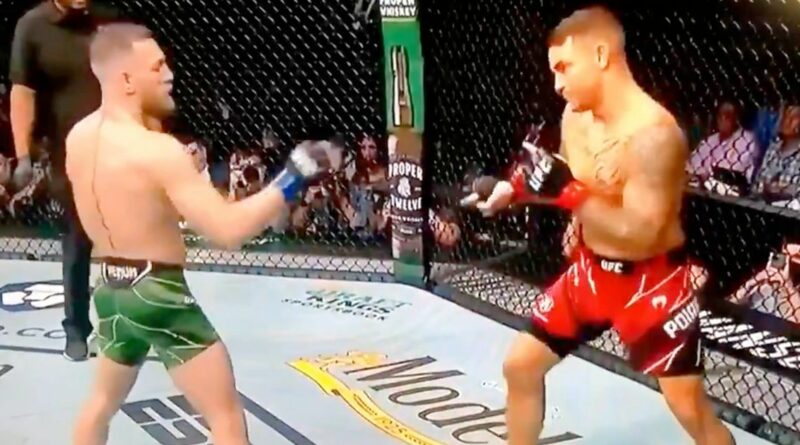 The main event of UFC 264 ended in underwhelming fashion on Saturday as Conor McGregor lost his trilogy fight against Dustin Poirier due to a doctor’s stoppage after breaking his ankle.

‘The Notorious’ suffered the horror injury after his lower leg broke under the weight of his back-step with seven seconds remaining in the first round.

Poirier, 32, said in his post-fight interview that one of his checks to an earlier low kick weakened McGregor’s left leg, and eagle-eyed fans spotted the moment they think ‘The Diamond’ referred to.

Social media users circulated a clip from 20 seconds into the fight, where Poirier uses his knee to block a McGregor kick, immediately pointing to his opponent in a knowing manner. One fan tweeted in agreement that was the moment McGregor first damaged his ankle: “This is it man! This is the kick, plus the insane damage Conor took. Conor was beyond exhausted, lost his coordination and stepped wrong, putting his weight on the already damaged part of his bone. Fair play by Dustin. Trilogy over.”

Another wrote: “He probably fractured it there, then him falling back it completely snapped.”

There was some consternation among spectators as to whether McGregor, also 32, could have kept fighting for four minutes on a damaged limb.

But Poirier was certain in his assessment, telling commentator Joe Rogan in his octagon interview: “He fractured it in one of the checks at the beginning of the fight.

Do you think Conor McGregor deserves a fourth encounter against Poirier? Let us know in the comments section.

“Then it broke on the punch, yeah, for sure.

“When I pointed at him at the beginning of the fight, that’s when I checked a good kick, I bet that’s when it cracked.”

The doctor’s stoppage means Poirier has now won his last three fights and suffered just one defeat in his last eight UFC outings.

McGregor, meanwhile, has lost back-to-back MMA fights for the first time in his professional career and recorded three defeats from his last four matchups.

The Dubliner bolted out of the gate with a barrage of leg kicks early in Saturday’s rubber match, mirroring the same tactic that led Poirier to defeat him at UFC 257 in January.

But Poirier came back into the bout with meaningful blows of his own before using his wrestling to unleash some effective ground and pound to win the round.

The official fight scorecards revealed all three judges gave the first round to Poirier, with two judges even scoring the opening salvo 10-8 to the victor.

UFC president Dana White indicated after the fight that the two rivals will meet a fourth time once McGregor has recovered, while Poirier is next in line for a shot at lightweight champion Charles Oliveira.

McGregor vs Cerrone: Dana White announces plan for Conor McGregor should he win at UFC 246

Fighter tumbles out of cage after KO