Former lightweight champion Rafael dos Anjos has had a successful return to the division with a split decision over Paul Felder.

Having gone up to the welterweight division after losing the lightweight championship belt and then his following fight to Tony Ferguson, dos Anjos returned to lightweight for the first time since 2016.

Dos Anjos was originally meant to fight Islam Makhachev in UFC 254 but the Brazilian and his entire family tested positive for COVID-19.

While they all recovered, Makhachev had to pull out of the rescheduled fight five days ago with Felder stepping in last minute.

The American, who had been training for a triathlon and was scheduled to commentate at the event, had to lose 14 pounds between Monday and weigh in and somehow pulled it off but it was always going to be a difficult fight for Felder to claim the victory.

While the pair traded punches, dos Anjos’ full training camp held him in better stead with the Brazilian coming away with the win.

But the cards were once again bizarre with two judges calling it 50-45 dos Santos, while the third judge Chris Lee had it 48-47 to Felder.

The call even caught Felder by surprise with the American visibly reacting with shock to the decision.

But UFC Hall of Famer Michael Bisping said the judge may not be a judge in the UFC for much longer with decisions like that.

“Whoever that judge was, I suggest he goes and has a good long look in the mirror and maybe find another job,” Bisping said. “No disrespect to Paul Felder of course, tremendous fight, I’ve got so much respect for Paul Felder, what he did, he dared to be great and he looked great, he looked sensational. But tonight belongs to Rafael dos Anjos, a successful return to the lightweight division.”

TSN Sports MMA reporter Aaron Bronsteter revealed that Lee had been “involved in 10 UFC/Bellator split decisions in 2020 and was the dissenting judge in 7 of them”.

ESPN’s Ariel Helwani agreed and said “That judge who scored it 48-47 should not judge another UFC fight for a very long time.”

MMA Fighting reporter Damon Martin added “The judge who scored that 48-47 for Paul Felder should never judge another fight again. That‘s an atrocious scorecard,” while The Athletic’s Shaheen Al-Shatti called it a “preposterous score”.

So much respect to Paul Felder for stepping up. The 48-47 scorecard for him is insane, but thankfully the right guy won. Rafael dos Anjos is a monster, and is among the greatest winners in UFC history. #UFCVegas14 pic.twitter.com/9reDGMNpMY

48-47 FELDER?! One of the worst scorecards I've ever heard of. Dos Anjos wins the fight by split decision, but wow. #UFCVegas14

Paul Felder goes on a 25-minute bloody war with Rafael dos Anjos after taking the fight on just five days' notice. Clear decision win for RDA in my opinion but can't deny Felder's heart there. Hats off to both.

Who was the drunk judge who scored the fight 48-47 for Felder? #UFCVegas14

How the hell did one of the judges give the fight 48-47 to Felder?!#UFCVegas14

The result came after Khaos Williams made a name for himself with a 30 second knock out of Abdul Razak Alhassan in the co-main event.

The murderous finish makes it two straight knockout victories for Williams, with the two bouts combining for a total fight time of only 57 seconds. He knocked out Alex Morono at UFC 247 in 27 seconds.

Khaos Williams def. Abdul Razak Alhassan by KO (punches) at 0:30 of round 1

Sean Strickland def. Brendan Allen by TKO (punches) at 1:32 of round 2 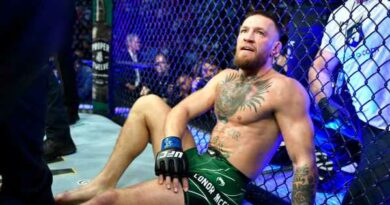