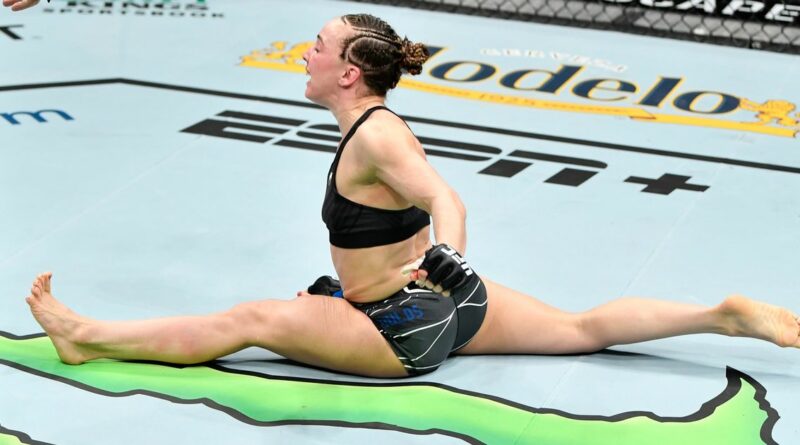 UFC star Vanessa Demopoulos is looking to make it three wins from three in 2022 – and it seems a switch in focus is behind her upturn in form.

American Demopoulos, 34, heads into her bout against Brazil native Maria Oliveira, 25, at UFC Vegas 65 this weekend having already beat Silvana Gomez Juarez and Jinh Yu Frey this year. Before that, the strawweight had lost three of her previous four fights, including her debut at flyweight.

Prior to beating Juarez at UFC 270 in January, she quit her job as a stripper to focus on her MMA career full-time. Speaking after that victory, she said: "I don’t think it’s a secret, I was an exotic entertainer for 13 years."

What gave her profession away was an eye-catching celebration which saw her jump into the splits. "Yeah, that’s my stripper guard there," she joked.

"I walked away from being a stripper to continue this camp. I quit dancing about six to eight weeks ago just so I could focus full-time on MMA, take this extremely seriously in the gym every single day."

What's your prediction for fight of the night at UFC Vegas 65? Let us know in the comments section.

The decision has paid off, with Demopoulos picking up a $50,000 (£42k) bonus for submitting Juarez. Her previous profession has helped her performances in the Octagon, though.

In a 2018 interview with Combat Press, she explained: "Pole dancing takes a lot of agility, a lot of body awareness, a lot of dexterity and flexibility, and you have to be quick with your reactions.

“It’s similar to what jiu-jitsu feels like, but in jiu-jitsu, you have options of tapping if you have to, or you’re safe if you are on the ground.

"With pole dancing, it’s very death-defying in the sense that you’re literally hanging on with, like, a limb, and one wrong move, you’re done. Like, I’m falling from two stories and that’s it. You only fall once."

A win against Oliveria for 'Lil Monster', who authored a book called ‘The Stripper Bible', would take her MMA record to 9-4, and she's certainly looking forwards, not back.

Speaking to MMA Mania, she said: "I had to pace myself so that I could make it through an eight-hour shift of doing crazy gymnastics and dancing.

"Just being a personality throughout the duration of those shifts. It was exhausting to be awake until four o’clock in the morning and still make sure you’re maintaining a healthy lifestyle to be an athlete at the highest calibre possible in one of the toughest sports imaginable.

"So it’s been nice being a retired stripper, for sure."