This is the final episode of AEW Dynamite before this weekend’s Full Gear PPV event.

This was Trent’s first solo match in AEW, but Chuck Taylor and Orange Cassidy accompanied him to the ring for this match.

At one point, Orange Cassidy came into the ring and delivered his massive striking kicks but then PAC was not amused and kicked his head off. This sent Trent into berserker mode.

PAC hit the Black Arrow, but Trent somehow kicked out. PAC then locked in the Brutalizer and the referee called for the bell when Trent passed out.

After the match, PAC grabbed a microphone and talked about his match on Saturday against Adam Page and will make an example of him at Full Gear.

Cody Rhodes was out next to finally make his major announcement — the one Chris Jericho interrupted a couple of weeks ago. He mentioned Eddie Graham, Cowboy Bill Watts, and The American Dream Dusty Rhodes as the best of their town. He said there was controversy in the fact that they were talent and management. He then said he is proud of AEW because it means freedom for the wrestlers.

He can’t let the controversy of him being a wrestler and management bother him. Cody said that if he does not beat Chris Jericho at Full Gear on Saturday, he will never challenge for the AEW world title again.

He pointed out that Jericho called him a Millennial who was entitled. Cody said that Jericho was the son of a professional hockey player and that Jericho needs this generation more than they need Chris Jericho. Man, this promo is FIRE.

When The Elite and the Inner Circle face off they will eat them alive.

The winner of this match gets into a three-way for the AEW tag team titles at Full Gear with SCU and the Lucha Bros.

Honestly, Dark Order dominated much of the match, but it was Private Party who came back and won at the end with Gin and Juice. The match was pretty good and this might be where Dark Order needs to work right now until they get over with fans.

After the match, SCU and Lucha Bros arrived to sell the match this weekend.

Up next was an Inner Circle video sent in by Chris Jericho. In the video, Sammy Guevara calls Jericho a father figure to him but Jericho seems distracted. Virgil (Soultrain Jones) also talked about Jericho. Santana and Ortiz spoke about him. A woman from his church talked about Jericho as well. Guevara said that Jericho is 48, “the youngest AEW champion in history.”

Jake Hagar was shown. He just stood there and didn’t say anything. Virgil said Jericho is like Olive Garden’s breadsticks — unlimited. Jericho said that he has to face this alone because he is “Le Champion.”

Up next was a video showing Santana and Ortiz attacking the Rock N Roll Express last week.

This match was a long hard-hitting match. This weekend, Riho defends her title against Emi Sakura, one of her trainers. That played into this match where Sakura wrapped up Riho for the pinfall.

Next was Brandi Rhodes promo, where she talked about how everyone said she doesn’t belong, but she said that Awesome Kong’s muscle and Brandi’s brains would be unbeatable because no one can stop Kong.

Tully Blanchard was with Shawn Spears. Brandon Cutler was actually showing some charisma in this match, which is really needed. However, Spears was in ultra-violent mode all the time, which makes him infinitely more interesting than he ever was in WWE.

Once Spears turned up the aggression, Cutler had no chance. Spears won with the Death Valley Driver. After the match, Spears tried to drop Cutler on the chair and Joey Janella ran in for the save.

Up next was a promo on the Jon Moxley vs. Kenny Omega match for Full Gear

Jake Hager came out with Chris Jericho for the match.

The match was a great one that saw everyone get in their moves and it did not disappoint.

PAC ran down and interfered by hitting Adam Page and Jericho won with the Judas Effect. Hager, Guevara, and Jericho beat down Page after the match.

Cody came in to save Page. Hager and Jericho backed up the ramp, but MJF ran out and hit Hager with a chair and threw Jericho into Cody, who dropped Jericho.

Then Moxley and Omega began to fight to the back and Nick Jackson dived off the top of the Tron onto everyone. Everyone then fought around the ring to end the show. 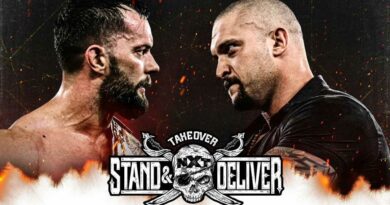