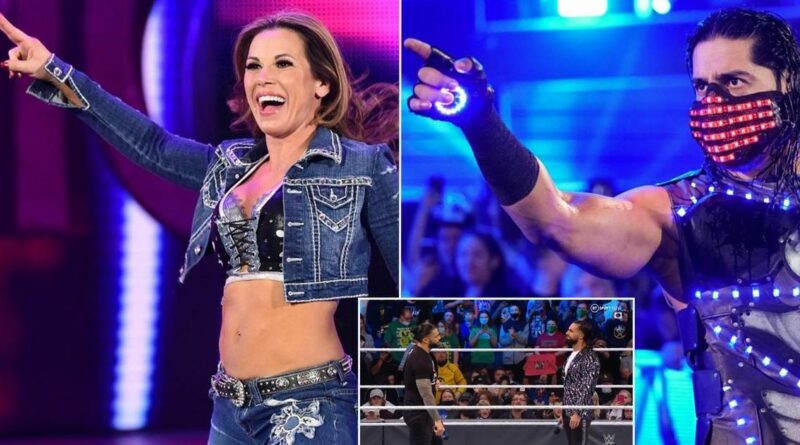 Rivalries continue to heat up as we approach the Royal Rumble at the end of the month.

The match card is starting to take shape and the 35th edition of the event emanating from The Dome at America's Center in St. Louis, Missouri is set to be one that will long in the memory.

One of the standout matches is Roman Reigns facing Seth Rollins for the Universal title, in what is sure to be one of the night’s most pulsating encounters.

The legendary Mickie James is set to compete in the women’s Royal Rumble match, despite being contracted to rival company IMPACT!

She reveals how the opportunity came about, and we take a look at high-flyer Mustafa Ali, who is keen to head for pastures new.

After Seth ‘Freakin’ Rollins appeared in Roman Reigns’ locker room at the end of SmackDown two weeks ago, the pair went to the ring and stood face-to-face last week on the blue brand.

The pair began to trade verbal shots at one another, with the ‘Visionary’ insisting he created Reigns when they were members of the Shield, and will destroy him and end the Tribal Chief's long reign as champion.

“If I wanted to main event the royal Rumble with a megastar, I would have chosen your wife,” he said confidently, before Roman’s cousins and SmackDown tag champs The Usos, attempted to jump Rollins from behind.

The astute former WWE champion was able to evade the twin’s clutches, but they would get their hands on him on Monday's episode of Raw, sending a message on behalf of the dominant champion with a vicious double superkick.

With a fortnight remaining before the pair rekindle their historic rivalry, we are sure to witness the grappler's attempts to get one over on the other before the bell rings on Saturday 29.

Ali wants out of WWE

Mustafa Ali, one of the most gifted and athletic performers on WWE’s books, now wants to leave the company.

The former 205 live superstar took to Twitter to express his desire to leave.

"I have a message that is much bigger than my dreams in pro wrestling. Despite my best efforts, I will not be able to deliver this message while working with WWE," he penned.

“Therefore, I am requesting my release from WWE."

It is reported that the 35-year-old had a row with chairman Vince McMahon, which may suggest the reason for his request to head for pastures new.

He tweeted: "An argument with Vince McMahon may have led to Mustafa Ali's WWE absence since November, Fightful Select has learned."

In six years with the company, Ali has never won a championship in WWE and has been absent from company programming since November.

The last significant moment of his career came at the Crown Jewel event last October, when he competed in a singles match with Mansoor – which marked the first ever WWE match on pay-per-view featuring two Muslims.

WWE do not usually allow wrestlers contracted to other promotions to appear on their shows.

That has now changed as six-time women’s champion Mickie James, the current IMPACT Knockouts champion, has been announced as an entrant in this year’s women’s Royal Rumble match.

The iconic grappler, who last appeared in WWE in April 2021, explained how the opportunity came about and how the company flung open the fabled ‘forbidden door’.

“It was a few weeks ago, and Scott had called me first…just to kind of see where I was at and if I was interested,” she told Ariel Helwani.

“I think immediately I was excited, because I think about this historically has never happened before, for WWE to do this or to have anyone participate in the Rumble, especially to acknowledge the championship.

"It’s really, it’s cool. And it just shows a different amount of respect – I feel really great about it.

“Plus, I think, in my mind, the last thing most people bring up or talk about was on the other end of the spectrum with and so it’s just cool not to have that be the thing, or the last thing, or whatever that is. So I’m so excited, honestly.”

James is one of several legends who will make a return for the iconic match, but who will be the last woman standing and which woman will earn a title match at WrestleMania?

AEW All Out PPV sells out in 15 minutes