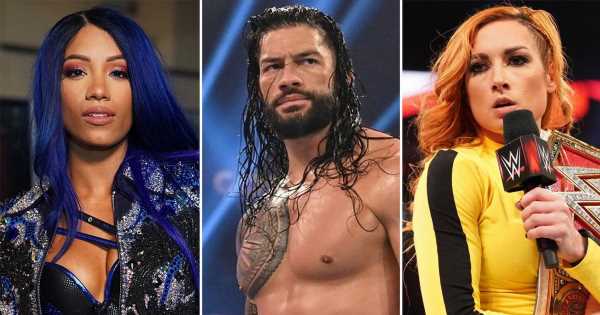 We are heading towards the time of the year that every WWE fan adores – that’s right it’s Royal Rumble season!

The first of WWE’s ‘big four’ pay-per-views is billed as ‘the first stop on the road to WrestleMania,’ and it couldn’t be more true!

The men’s and women’s 30-person battle royals are two of the most highly anticipated events on the WWE calendar and we are keen to see who will challenge for one of the company's top belts at WrestleMania.

While the fields for the respective matches are still filling up, two of the company’s premier champions in Becky Lynch and Roman Reigns now know who they will defend their coveted belts against at The Dome at America's Center on January 29 – who are they?

Roman Reigns’ championships is under threat!

Roman Reigns was due to defend his WWE Universal title against Brock Lesnar at the Day 1 pay-per-view on New Year’s Day.

However, he tested positive for Covid-19 and could no longer compete, therefore Brock was added to the WWE title match at the same event, which he went on to win.

The Tribal Chief is still champion and returned to SmackDown this past Friday, where he delivered a superman punch to Lesnar.

Later that night, official Adam Pierce said he was given the task of choosing who Reigns’ Royal Rumble opponent will be.

At the show’s conclusion, the 36-year-old was in his locker room when someone knocked the door to the beat of a familiar tune.

Puzzled by what was transpiring, Reigns waited to see who it was and soon frowned when his former Shield teammate Seth Rollins walked in and laughed in his face before he walked away.

That would foreshadow the news we heard on Monday’s latest episode of Raw, as Rollins confirmed he would challenge his buddy for his title at the Royal Rumble, before making a bold claim.

“I am excited for the Royal Rumble because it is the night where I will become the new Universal Champion,” he proclaimed.

“There's a few things in life that are certain – death, taxes and Seth Rollins beats Roman Reigns every single time!”

And what about Becky?

The main event of Raw saw Bianca Belair, Doudrop and Liv Morgan compete in a triple-threat match to determine who Lynch will defend her title against at the Royal Rumble.

Liv narrowly lost to ‘Big Time Becks’ at Day 1, and would be keen to have another shot at the champion.

Belair is still seething after losing her SmackDown women's championship to Lynch in just 26 seconds when she returned to the company at SummerSlam last August.

Doudrop on the other hand, who has never had a championship opportunity, fumed over Becky and Belair receiving their fare share of opportunities.

The Briton had the chance to earn her shot and she did just that as she pinned Morgan for a huge win.

Lynch, who was on commentary, denied Belair her chance at winning as she interjected herself in the match, pulled the EST out of the ring and threw her over the announce table and out of contention.

‘The Lass Kicker’ will have her hands full with Doudrop at the Royal Rumble who is gunning for a maiden Raw Women’s title.

Sasha Banks sadly will not be at the Royal Rumble

The Boss will no doubt have been a huge favourite in the Royal Rumble match, but after suffering a foot injury recently, she has been ruled out of the event.

Banks is scheduled to miss 6-8 weeks after her untimely injury, which appeared to take place at a live event on January 2.

She was working a match with great rival Charlotte Flair, when she took a tumble and landed awkwardly on her foot before she was helped backstage.

Following the news, Banks took to Twitter and snapped: “Enjoy it ladies cause when I come back, I'm coming back… for everything. 30 women just got real lucky!”

However, it’s not all bad news as the former women’s champion is still scheduled to compete at WrestleMania in April.

WWE enter through the forbidden door?

In other news, Mickie James, former WWE star and the current IMPACT Knockouts champion, has been confirmed for the women’s Royal Rumble, which caught everybody by surprise.

WWE tends not to allow stars contracted to other promotions to appear on their shows and vice versa.

They now appear to have changed that for the Royal Rumble and fans are now wondering if any stars from other companies will make an appearance in their 30-person matches.

With WWE now appearing to have walked through what is known as the ‘forbidden door’, will this be something we see more from them in the future?