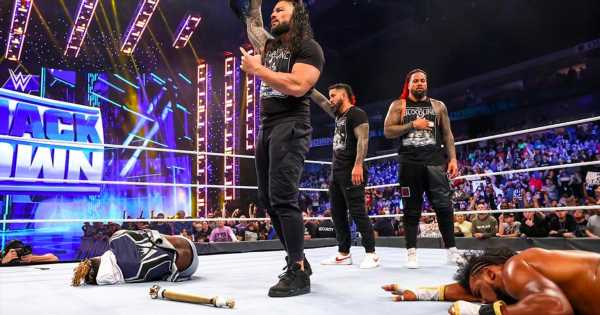 It’s that time again! Another week of hard-hitting WWE action is in the books, which means it’s time for another column featuring the biggest news and talking points from the company.

WWE Universal champion Roman Reigns made his return to Friday Night SmackDown with a confident promo to open the show.

He was interrupted by the New Day and following Jimmy Usos’ match with King Woods, the latter and tag team partner Kofi Kingston soon felt the wrath of ‘The Tribal Chief.’

The last of the traditional ‘Big 4’ WWE pay-per-views Survivor Series is on the horizon and the teams for the 5-on-5 elimination matches have already been named. Which brand will have the upper hand this year?

The company’s UK tour is set to conclude in Manchester tonight and we have some exclusive quotes from the superstars.

The Bloodline make a HUGE statement

It was fitting that Roman Reigns began this week’s episode of SmackDown, taking the time to address where he was last week and basked in the adulation from the crowd.

He didn’t take long to address what took place on the show that he missed, as his cousins and SmackDown tag team champions The Usos, lost to King Woods and Kofi Kingston of The New Day.

The disappointed champion then turned to Jimmy, who was pinned in the crushing defeat and told him to “fix” the problem.

Therefore, he faced Woods, who became the new King of the Ring at Crown Jewel last month, in the main event, and should Uso come up short, he would have to “bend the knee” in front of his opponent.

This became a reality when Woods rolled up Jimmy for the win and as the dismayed champion began to carry out the order, Reigns ran out to put an emphatic stop to proceedings.

He and his cousins proceeded to mercilessly beat Woods and Kofi, with the King forced to watch as the Usos attacked Kofi’s knee, leaving him in agony.

“I’m the real King around here!” Reigns yelled, before issuing a challenge of his own. "If you show up next week, I’m going to show you what a real king looks like.”

It has been confirmed that Woods and Reigns will square off on the upcoming edition of SmackDown, and you don’t want to miss it!

We’re officially on the road to Survivor Series!

This week saw the announcement of the Survivor Series teams on social media.

Usually qualifying matches take place on both shows to decide who will represent the respective brands at the event.

However, both the men’s and women’s teams have already been confirmed, with Raw making a late change on this week’s episode.

The latter replaced Mysterio’s son Dominick after they were put in a match with the final spot on the team up for grabs subject to official Adam Pearce.

On the women’s side, Raw have chosen a team of Bianca Belair, one of half of the women’s tag team champions Rhea Ripley, Queen’s Crown winner Zelina Vega, Carmella and number one contender for the Raw women’s title, Liv Morgan.

WWE embarked on a week-long tour of the UK, which will conclude tonight in Manchester.

Prior to the London show this past weekend, The Mirror caught up with some of the superstars who made the trip over from the States.

WWE champion Big E commented on his epic title win and how much it means to him to hold the company’s most prestigious title.

“It feels great. Being WWE champion in and of itself is very cool, but what made it special is my peers, fans, so many people reached out and were so positive and so kind," he said.

“It made the moment of winning and becoming champion just absurdly special for me.”

He spoke on the number one contender for his WWE championship Seth Rollins and vowed to retain his precious title when they eventually collide inside the squared circle.

The champ added: “I think he is an incredible talent, he might be the best of our generation. But I feel like this is my time, I know how much holding this championship means to me, how many doors it has opened for me, and I don’t plan on letting go of that anytime soon.

“I’m excited about it, I’m looking forward to it and I want my reign to be about beating the very best.”

One half of the Raw tag team champions Riddle says he expects his partnership with Randy Orton to go on for "at least two more months", and Doudrop, who attacked Bianca Belair this past week on Raw, is delighted to see the number of her fellow Scottish stars doing well in WWE.

However, she revealed she "is not surprised" by it and says Scotland "were sitting on a goldmine" in terms of wrestling talent for some time.

Ken Shamrock discusses returning to Impact Wrestling, his issues with Moose and why AEW shouldn’t run on Wednesday nights against WWE